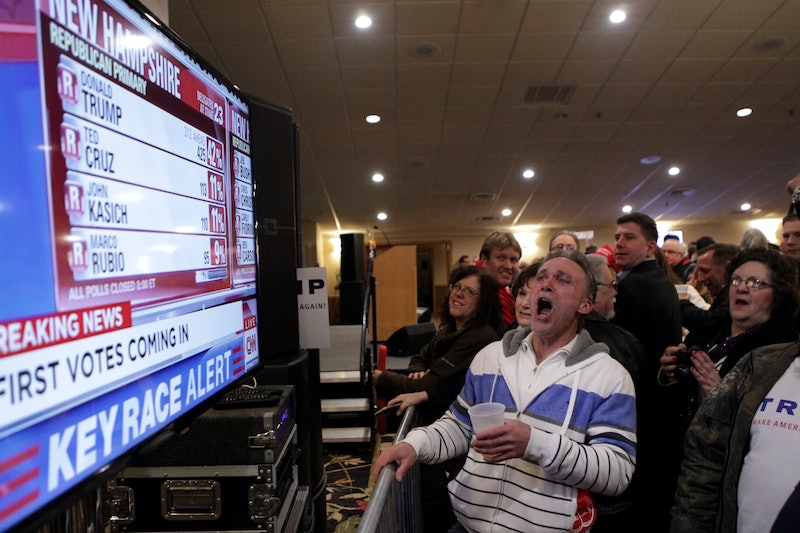 Though GOP candidate Donald Trump was part of the circle of losers when Texas Sen. Ted Cruz won the Iowa caucus last Monday, on Tuesday night, the controversial Republican returned to what he knows best: winning. Although Trump appeared quite confident in his address to New Hampshire voters that his win meant the world was right again, some social media users weren't quite as certain. So without further ado, here are the best reactions to Trump's New Hampshire victory speech, which range from ecstatic to utterly confused.

Just minutes after the last polling stations closed in New Hampshire, officials announced that the billionaire was projected to win the state's primary. Soon enough, the final tally confirmed that Trump won by more than 15 percent over second-place candidate John Kasich.

Trump took the stage at his campaign headquarters in New Hampshire just before 10 p.m. ET, and the presidential hopeful kicked off his speech with the obligatory "We are going to make America great again," before thanking just about every single person in his family, from his late parents to his campaign manager Corey Lewandowski. Then, after thanking the "special, special people" of New Hampshire, Trump asserted that he would get the country's money and business back from countries like China, rebuild the military until it's "so big and so powerful," replace Obamacare, and "knock the hell out of ISIS."

More captivating than Trump's victory speech, though, was the range of reactions from folks around the globe published for all to read on the Twittersphere.

Shouldn't this Trump supporter be familiar with the candidate's favorite lingo? Trump wasn't "killin' it." He was #Winning it.

Well, everyone could have expected this. Right?

Feeling embarrassment for the winner? That can't ever be a good sign.

While some Americans are excited at the prospect of a Trump White House, others view it as certain death. To each their own.

Anyone who hears the sounds that the adults on Charlie Brown cartoons make when a primary winner is speaking can't be all that invested in the results.

Someone who's really just telling it like it is.

The Folks Ready To Leave The Country

Worst victory speech of all time? I feel like there must be some pretty bad ones out there. Is he counting ones in foreign languages, too?

To put it bluntly.