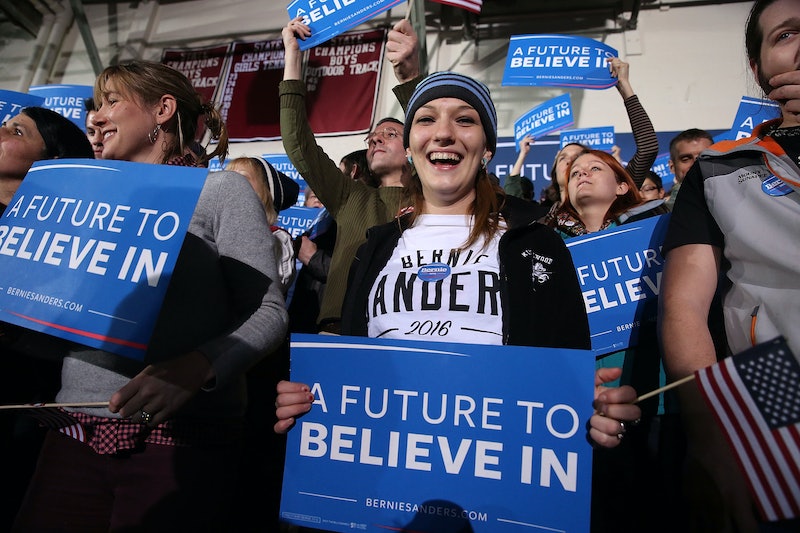 Tuesday kicked off the first official primary election of the United States presidential race in New Hampshire, but was that the quickest win ever or what? Polls were open well past 7 p.m. ET after a huge voter turnout, and shortly after they closed, the results seemed to be in, coming just after 8 p.m. Billionaire businessman Donald Trump was announced as the winner of New Hampshire's Republican primary after coming in second to Ted Cruz in the Iowa caucuses last week, while Bernie Sanders was the winner on the Democratic side, after losing by the tiniest margin to Hillary Clinton in Iowa.

Looks like New Hampshire voters really knew exactly what they wanted and went all-in for it. Many are already pointing to the fact that both of these candidates are outsiders in their parties. On the one side, Trump is a billionaire businessman and media personality with little political experience, and on the other, Sanders has been a longtime activist running as a democratic socialist, and has consistently called for a "political revolution." Regarding these wins, political commentator and MSNBC host Rachel Maddow said, "The idea of the establishment can be safely thrown away." WNYC tweeted:

Voters showed up for Trump for a few reasons. Half of Republican voters have made it clear that they're looking for a political outsider, and two-thirds said they agreed with Trump's plan to ban Muslims from entering the U.S. Some of the other important points for Republican voters were their worries about terrorism, support for deporting undocumented immigrants, and Trump's war on "political correctness."

Sanders is the first non-Christian candidate to win a presidential primary. Having grown up Jewish, he has said that he does not participate in organized religion. And while many of this country's foundational values find their roots in religion — despite the supposed separation of church and state — voters still felt the Bern. Some of the voters who came out for Sanders today essentially did so not only because they believe that the U.S. does indeed need a political revolution, but also because he is "a person like us," as one told The Guardian.

While votes are still being counted, both Trump and Sanders have already earned some delegates. On the GOP side, there are 23 available delegates, and 7 have gone to Trump. Of the 24 available delegates on the Democratic side, Sanders has so far received four, and Clinton has received two. But one thing is for sure: Americans are tired of establishment politics, whether they vote Republican or Democrat, and these wins in New Hampshire are a testament to that.