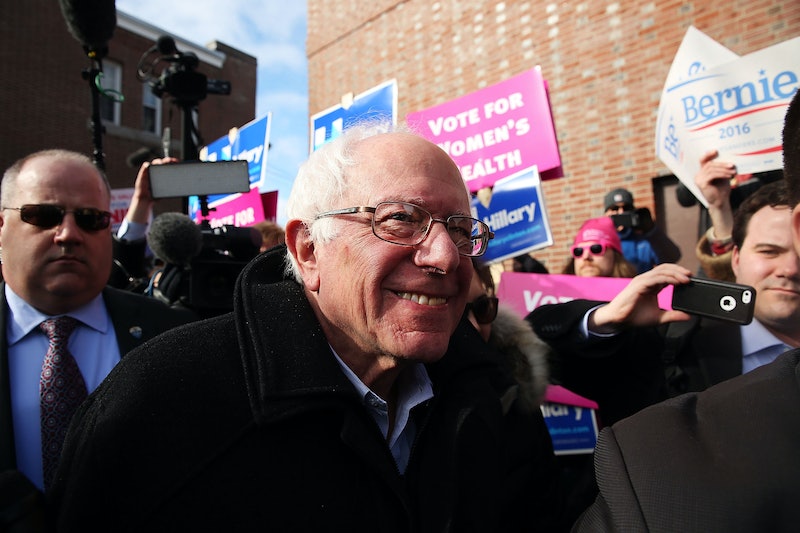 Tuesday, after meeting with his elated supporters, Bernie Sanders celebrated his win in the New Hampshire Democratic primary with the perfect metaphor: playing basketball with his grandchildren, according to MSNBC, who were no doubt feeling the Bern. An amazing GIF shows the Sanders was doing more than just horsing around on the basketball court — he got an excellent shot in.

Sanders won the country's first Democratic primary in record time — New York's Daily Intelligencer blog reported that Clinton called Sanders to congratulate him on his win at 8:49 p.m., less than an hour after New Hampshire's polls officially closed. As of this writing, estimates have Sanders beating Clinton in the New Hampshire primary by a major margin, winning 59.1 percent of the Democratic vote compared to her 38.2 percent, which means that Sanders will get 13 delegates out of the primary, while Clinton will only get seven.

After Feb. 1's Iowa caucuses, Clinton beat Sanders by an incredibly narrow margin — she came in with 49.9 percent of the vote, compared to Sanders' 49.6 percent — gaining 23 delegates to Sanders' 21.

So the big margin this time around was no doubt reason to celebrate. The only thing that could have made it better was a Sanders dunk.

You miss 100 percent of the shots you don't take, after all.