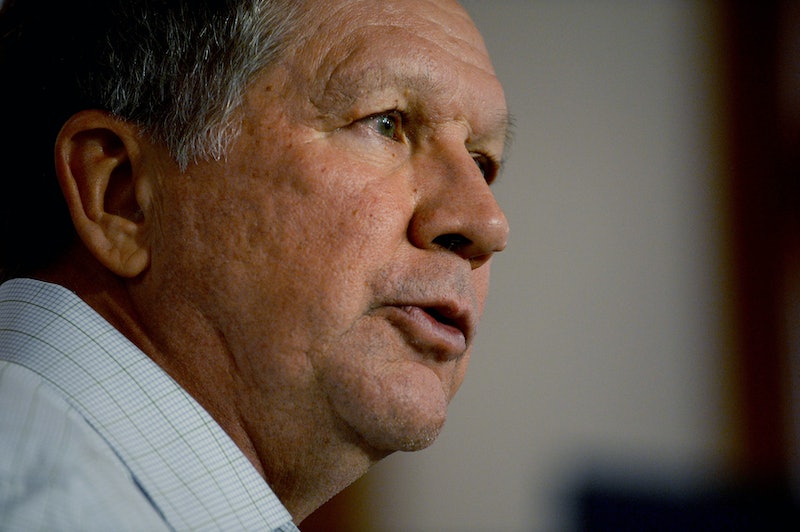 He may not have taken first place on Tuesday, but John Kasich is calling New Hampshire a victory. Donald Trump may have won the Granite State, but the New Hampshire primary marked a turnaround for the Ohio governor. The AP declared Kasich finished second in New Hampshire. His campaign has labeled the result as nothing short of "dominant," according to a press release from his campaign. John Weaver, Kasich's senior strategist, also used the second place finish as an opportunity to take a swipe at rivals Jeb Bush and Chris Christie, boasting in the press release that "Governor Kasich is now the leading governor in the race and the only one with a realistic chance at the nomination."

After Kasich decided to ditch Iowa — where he eventually failed to earn 2 percent of the vote — to focus on New Hampshire, it appears that his gamble has paid off. Considering that Kasich is probably the least recognizable of the coterie of the Republican presidential candidate to most Americans, his strong finish tonight may seem like a surprise — though it shouldn't be. Kasich invested a tremendous amount of time and energy into winning over New Hampshire voters, far outpacing his GOP rivals for most personal appearances in the state. The New York Times' Robert Draper reported Kasich made 102 town-hall-style appearances in the Granite State.

And even before the New Hampshire primary results were in, Kasich had made it clear he had every intention of continuing his campaign onto South Carolina. "We take our snow boots off and put our flip-flops on," Kasich said Tuesday outside a polling station in Concord, New Hampshire. "We're going to go to South Carolina. We'll go tonight."

While Kasich's more than respectable finish in New Hampshire has certainly revived the momentum of his presidential campaign, the larger question is whether he has the funds to continue battling for the Republican nomination. Patrick O'Connor at The Wall Street Journal reported that since Kasich put so much of his money into New Hampshire, his campaign potential was questionable. However, Kasich dismissed such concerns, saying "We'll have the money and the organization, just like we always do. Sometimes we put it together with bailing wire and duct tape. But we always seem to get it done."