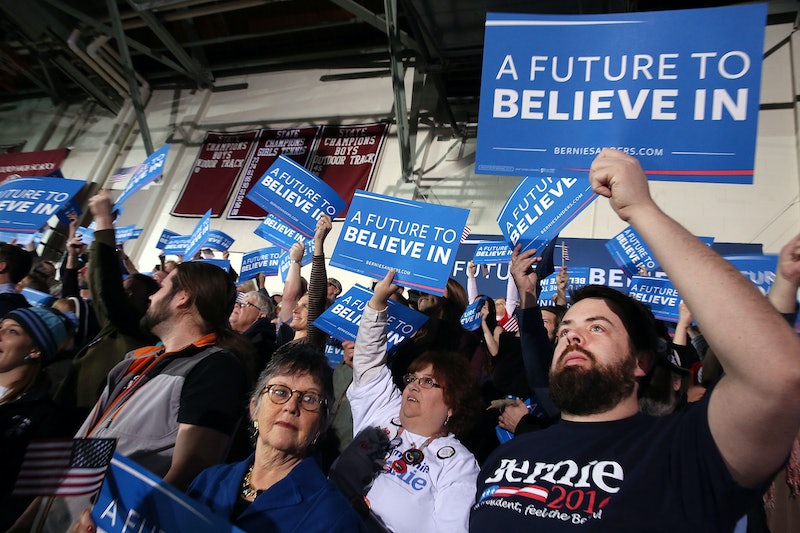 Well, that sure was quick. Almost as soon as the result began rolling it, and the whole thing was already declared over — the 2016 New Hampshire presidential primaries have been called, with Bernie Sanders and Donald Trump taking home the top slots. And that looks a whole lot different than what transpired just a week earlier — so, why is New Hampshire's primary so different from Iowa's caucuses?

In simplest terms, the single biggest difference is right there in the names. While Iowa uses a caucus system, the New Hampshire primary is, well, a regular old election. There's no big room full of arguing caucus-goers, no electing country delegates, no state convention, none of those intricate, highly arcane political mechanisms. Instead, it's that good old American democracy you know and love — show up to your polling place, make your pick, and whoever gets more votes comes out on top.

It's not even that way for the general election, thanks to the ever-controversial electoral college. Basically, the difference between Iowa and New Hampshire is the difference between only the most motivated and ardent citizens (caucusing is a much more involved process) making the choice, and the process being wide-open as we traditionally understand it.

For some perspective, voter turnout in Iowa stood at just 15.6 percent, down from the 16.1 percent mark in 2008. Compared to what happened in New Hampshire Tuesday night, that's a pretty exclusive affair — it's widely expected that Tuesday night brought record-high voter turnout to the Granite State.

As far as the differing outcomes go, however, it might be as simple as this: the electorates in Iowa and New Hampshire clearly value very different qualities in their presidential candidates. Iowa is traditionally a more conservative state as primaries go, and that's been borne out by the caucus results over the past couple of decades. While then-Sen. Obama was generally viewed as the most progressive candidate in his 2008 win over Clinton, the previous two cycles saw the less-liberal of the major contenders, John Kerry and Al Gore, notch the win.

Iowa is particularly notorious for its social conservatism, to boot. No shocks there — that's how you end up with Ted Cruz as your 2016 winner, joining such victorious also-rans as Rick Santorum and Mike Huckabee (although Santorum's win was ultimately changed, and awarded to Ron Paul).

By comparison, the results in New Hampshire this year made it out to be a liberal haven on both sides — wherever you fall on the debate the Democratic candidates have been having about the label "progressive," Bernie Sanders is by and large much further left than Clinton. And while Trump's rhetoric is often vulgar, reactionary, and downright bigoted — his commentaries and proposals on Mexican immigrants and Muslims have been downright horrifying — from a policy perspective, he's actually one of the less stridently conservative candidates on the Republican side.

Here's one thing that the two states have in common, however: their shared status as the gatekeepers of the parties' nominations. Since the Iowa caucuses first became what they are today back in 1972, only one candidate in either party has seized the nomination without winning in at least one of the two early voting states. That was Bill Clinton in 1992. This may not tell us much about the Democratic race, sure, as there are only two candidates, and one of them won each. But it does suggest something about the future for the Republicans — will it really be Trump or Cruz come the Republican National Convention in July?