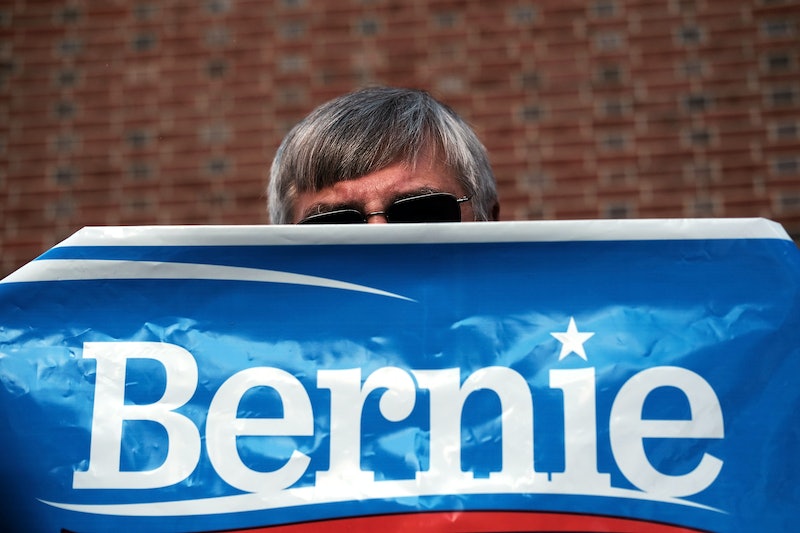 When you think of American presidents, you probably picture a long list of middle-aged to old white men. By that definition, Vermont Sen. Bernie Sanders perfectly fits the bill. Still, there's at least one reason that Sanders' victory in the New Hampshire primary was historic — and it's a fundamental difference that separates him from every previous winner of every previous primary ever held.

Sanders may be on the older side, and there's no doubt that he's white, but there's a notable difference you can't see: He's Jewish. In fact, with his win in New Hampshire on Tuesday night, he's the first Jewish candidate to ever win a presidential primary election. Needless to say, he could be the first Jewish president, if all goes his way throughout the rest of the year.

Not too long ago, labeling Sanders as a Jewish candidate could have had a negative impact on his campaign. Nowadays, though, "Jewish" is probably the least controversial label he wears. After all, it's not often that a candidate for president proudly calls himself a "socialist" (even if he tacks the word "democratic" on at the beginning). If you paid attention at all during the previous two presidential elections, you probably noticed that opponents loved to attack President Obama by calling him a socialist. (Some also tried to attack Obama on religious grounds by labeling him a Muslim, which he is not.)

Despite a history grounded in the separation of church and state, religion has often made its way into the modern political conversation. The current election is no exception. Back in September, the GOP's Ben Carson found himself in hot water after saying that he doesn't think the religion of Islam is consistent with the U.S. Constitution. Due to the rise in ISIS-inspired attacks around the world, Islam often winds up in political discourse. Judaism, though? Not so much.

According to research, although religion hasn't left political discourse, it seems to matter less and less in terms of actually influencing votes. Recently, Pew Research Center found that 80 percent of Americans say that a candidate being Jewish would not influence their vote. If some voters do choose to vote for a candidate who shares their religious beliefs, that's not necessarily bad news for Sanders, either. The proportion of Americans who are Christian has declined in recent years, while the proportion who are Jewish has risen, also according to Pew. Christians remain a majority for sure, but the changing landscape of the U.S. population may also reflect the decline of religion as an important voting factor.

Ultimately, it's highly unlikely that anyone who voted for Sanders in New Hampshire's primary on Tuesday did so because he is Jewish. But the important point is that his religion hasn't been a focus. Rather, it's more just a fun fact to mention now that he's won Tuesday's primary election — and that represents the changing mindset of the American voting population.