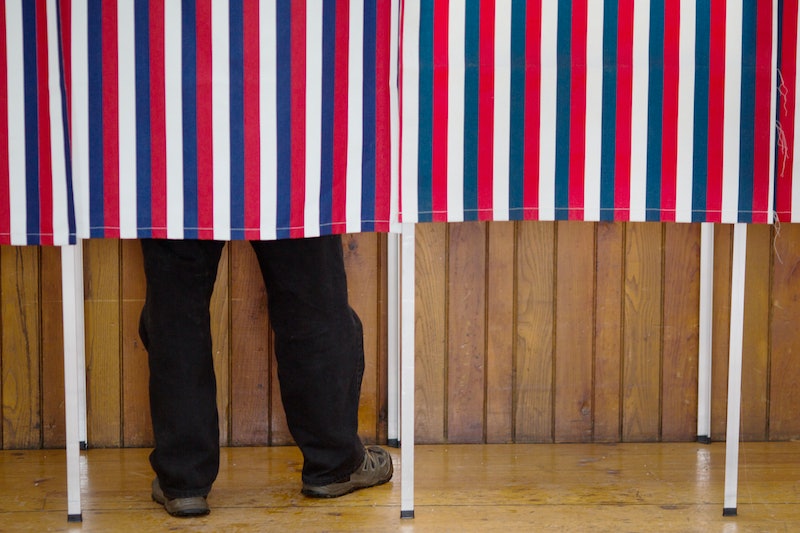 When results roll in for an electoral event as crucial as the New Hampshire primaries, voters often look to what percent of the vote goes to their chosen candidate. Following Tuesday's election in the Granite State, presidential hopefuls Bernie Sanders, Hillary Clinton, and Donald Trump all took home significant portions of the residents' votes. It's important to keep in mind, though, that those percentage points then determine the number of delegates allotted to each candidate. And that delegate count is a precious commodity in the party conventions set for the summer, since a candidate must have a minimum number of delegate votes to receive a party's nomination for president. So how many delegates does New Hampshire have?

The state actually has a fairly small number of delegates when compared to most others. There are 47 delegates combined among the Democratic and Republican sides, with 24 in the former and 23 in the latter. Across the country as a whole, there are approximately 4,760 delegates for the Democratic party and about 2,470 Republican delegates. And in contrast to New Hampshire, states like Florida and New York tout much higher numbers of delegates, with totals more in the realm of 400.

Each state's delegate count is by no means arbitrary. The Democratic National Committee determines the number for, say, New Hampshire based on how many electoral votes that state has and how the state has voted in past years, among other factors. The Republican National Committee, on the other hand, allocates three delegates per congressional district and 10 at-large delegates to each state.

In New Hampshire, candidates are awarded delegates on a proportional basis, giving real significance to those voting percentages in the election. Not every state works this way, and the parties can apply different rules in different states. This is a big reason candidates spend a good amount of time in New Hampshire in the weeks before the election, working hard to increase their popularity among residents. This only matters if a candidate has a certain level of support in the state, though. Under New Hampshire rules, a candidate must receive at least 10 percent of the primary vote in order to qualify for any delegate votes at all.

While New Hampshire may not be a heavyweight when it comes to offering delegates, every vote counts. And as election officials tallied the final numbers, presidential hopefuls either plugged away on their individual missions to hit that delegate threshold or watched that number remain a zero and reconsidered their places on the campaign trail.

As of Tuesday evening, Bernie Sanders was awarded 13 Democratic delegates from New Hampshire, while Hillary Clinton had seven. In the Republican Party, Donald Trump was awarded a total of 9 delegates.