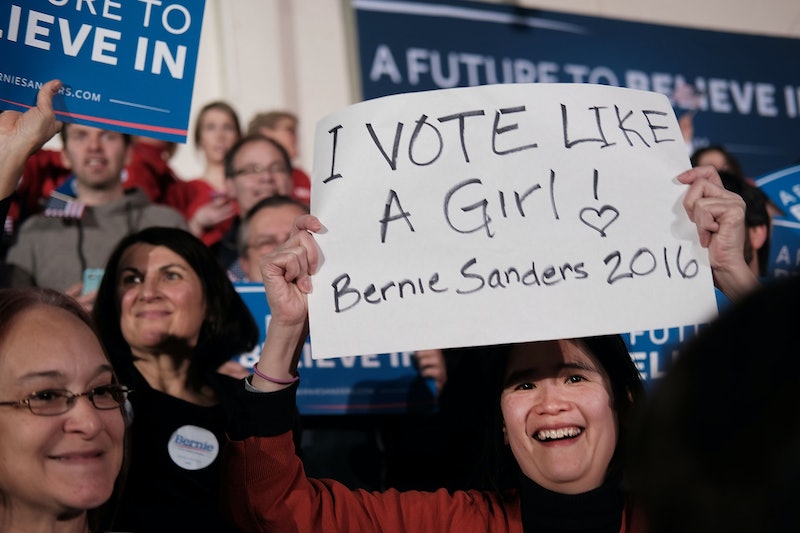 Well, Bernie Sanders has done it. The Democratic candidate and Vermont senator has secured the primary in New Hampshire. This affords him a proverbial leg up in the race against Hillary Clinton for the Democratic presidential nomination in more ways than one. During Tuesday night's vote, New Hampshire saw more women voting for Sanders than for Clinton.

According to CNN, 53 percent of Sanders' voters were women. A CBS poll reveals that 82 percent of women in the state aged 18-29 support Sanders, while only 18 percent support Clinton. How is that for making a political statement? Well, Sanders says that his New Hampshire win sends "a message that will echo from Wall Street to Washington, from Maine to California." Women in New Hampshire evidently agree.

Recently, influential feminists such as Gloria Steinem and Madeline Albright have criticized women planning on voting for Sanders. Although Steinem has since claimed that her words were misinterpreted, the two — among others — have encouraged female voters to stand by the female candidate. Meanwhile, the race carries on.

Clinton is standing tall despite her Tuesday defeat, and Sanders is proving a formidable opponent for the frontrunner, who was once thought to have the race locked down. She plans to continue her fight across the country, remarking in Hooksett, New Hampshire:

I still love New Hampshire, and I always will.

In addition to his lead among women — and his particularly strong lead among young women — in the Granite State, Sanders earned votes from a wide range of people, gathering a majority of votes from men, independents, and general voters under 45. Clinton won the majority of voters above the age of 65 and those with incomes exceeding $200,000 a year, as told by early exit polls conducted by Edison Research for The Associated Press and the television networks.

Sanders heads to New York after his win up north with an extra hop in his stride and a bit more authority. His victory speech included plenty of thanks for his Democratic opponent, as well as his supporters and his team. It looks like he is ready for the next step, so on to South Carolina and Nevada he goes. This race is closer than ever.