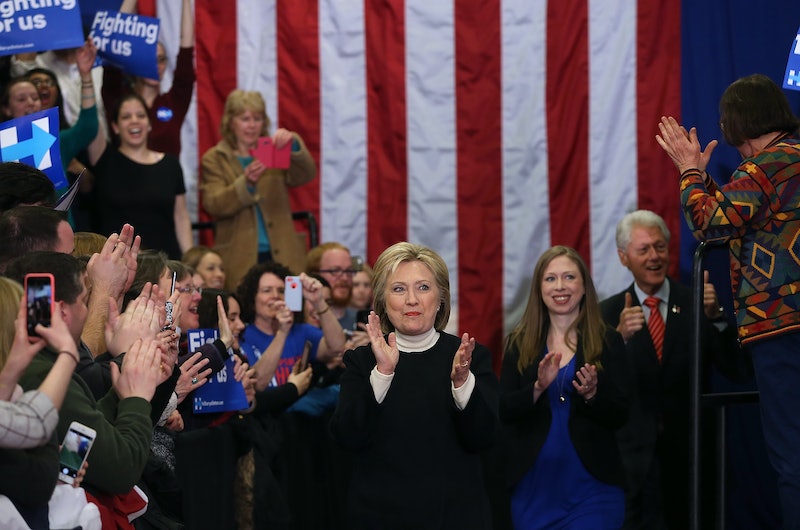 On Tuesday night, Democratic presidential candidate Hillary Clinton had a rough night in New Hampshire, but it didn't deter her when the time came for a speech — Hillary Clinton's New Hampshire speech was defiant and optimistic in the face of her loss to Bernie Sanders.

Really, you could hardly tell that Clinton was delivering a second-place speech, nor that her supporters were reacting to one. The scene at Clinton HQ was noticeably charged up, and her speech was full of firm, forceful fire. That was almost certainly no accident, considering Sanders' massive win after months upon months of hard campaigning. Putting on a strong, energetic face is precisely what Clinton needed to do. It can be a precarious position, as 2004 Democratic presidential candidate Howard Dean learned the hard way, with his infamous "Dean Scream" — you need to look fired up without, well, looking delusional. And all things considered, Clinton did about as exceptional a job of that as any politician could.

And, needless to say, she had a few implied jabs at Sanders in there, too — she claimed that her donors gave "less than $100, I know that doesn't fit the narrative," and insisted that when it comes to regulating Wall Street, she "knows how to get it done." Here's the full text of her remarks.

I want to begin by congratulating Senator Sanders on his victory tonight, and I want to thank each and every one of you. And I want to say, I still love New Hampshire, and I always will.

You know, when I started this campaign last spring, I knew we were facing profound challenges as a country. The way too many things were going just wasn't right. It isn't right that the kids I met in Flint on Sunday were poisoned because their governor wanted to save money. It isn't right for a grandmother here in New Hampshire or anywhere else to have to choose between paying rent and buying medicine because a prescription drug company increased the price 4000 percent overnight. And it isn't right that a cashier that I met here in New Hampshire's son is paid less than her son, even though she's been on the job for more years.

Now people have every right to be angry. But they're also hungry. They're hungry for solutions. What are we going to do? And that is the fight we're taking to the country. What is the best way to change people's lives, so we can all grow together? Who is the best change-maker? Here's what I promise: I will work harder than anyone to actually make the changes that make your lives better.

In this campaign you've heard a lot, about Washington, and about Wall Street. Now Senator Sanders and I both want to get secret, unaccountable money out of politics. And let's remember, Citizens United, one of the worst Supreme Court decisions in our country's history, was actually a case about a right wing attack on me, and my campaign. A right wing organization took aim at me and ended up damaging our entire democracy.

So, yes, you're not going to find anybody more committed to aggressive campaign finance reform than me. We also agree that Wall Street can never be allowed to once again threaten main street. And I will fight to rein in Wall Street, and you know what? I know how to do it!

So when I tell you no bank can be too big to fail, and no executive too powerful to jail, you can count on it. Now, the real differences in this race are truly over how do we create a future of prosperity, opportunity, and security for all of us? We need to build a growth and fairness economy, with higher wages and more good paying jobs, including a bold, national mission to create millions of jobs in clean energy, manufacturing, and infrastructure.

And we need — we need to unleash again the innovation of our entrepreneurs and small businesses, make it easier for parents to balance work and family, close the loopholes in our tax code, crack down on corporations that game the system, stop other countries from taking advantage of us with unfair trade practices.

But, even all that is not enough. We also have to break through the barriers of bigotry. African-American parents shouldn't have to worry that their children will be harassed, humiliated, even shot because of the color of their skin. Immigrant families shouldn't have to lie awake at night waiting for a knock on the door. LGBT Americans shouldn't be fired from their jobs because of who they are, or who they love.

And let's finally deliver something long overdue: equal pay for women in this economy. So, here's how I see it. A president has to do all parts of the job for all Americans. To make sure nothing holds you back. Not debt, not discrimination, not a deck that's always stacked for those at the top.

We need to break down those barriers and build ladders of opportunity for every person. That's how we will build a better tomorrow together, and that has been the cause and work of my life. My family, and my faith, taught me a simple credo: do all the good you can, in all the ways you can, for all the people you can. That's what called me to a life of service. Just like millions of teachers and nurses and police officers and firefighters and members of our armed services who get up every day and do the quiet work, the heroic work for all the rest of us.

But when children anywhere in our country go to bed hungry, or are denied a quality education, or face abuse and abandonment, that diminishes all of us. That's why I did start my career at the Children's Defense Fund. That's why I went undercover in Alabama to expose racism in schools. That's why I worked to reform juvenile justice in South Carolina. And that is why I went to Flint, Michigan on Sunday!

I know I have some work to do, particularly with young people. But I will repeat again what I've said this week: even if they are not supporting me now, I support them. I know I've had a blessed life. But I also know what it's like to stumble and fall. And so many people across America know that feeling.

And we've learned that it's not whether you get knocked down that matters, it's whether you get back up. So, my friends, please, join me in building on the progress we've made under President Obama, pushing forward, every single day, for as long as it takes to break down those barriers that hold us back. We've got to believe in the basic proposition of our country, when all Americans have the chance to succeed, when each of us has the opportunity to live up to our God-given potential.

Then and only then can America live up to it's potential as well! So let me thank all of you. I am very grateful to my wonderful family, knowing they are by my side keeps me going, every day. To the thousands of volunteers and organizers who called neighbors and knocked on doors in the New Hampshire snow.

To everyone who went to HillaryClinton.com to give what you could — more than 700,000 people have contributed to this campaign, the vast majority giving less than 100 dollars, I know that doesn't fit with the narrative. I know there are those that want to deny the passion and the purpose you all show every day for this campaign. But you are the reason we are here, and you are the reason we are going to win the nomination and then win this election together! Thank you all, thank you so very much!

It's a delicate balancing act, but you'd be hard pressed to find an example of someone nailing this sort of disappointing moment quite like Clinton did — this was undoubtedly one of her strongest speeches yet, in the face of what's clearly the most adversity she's faced in this race.