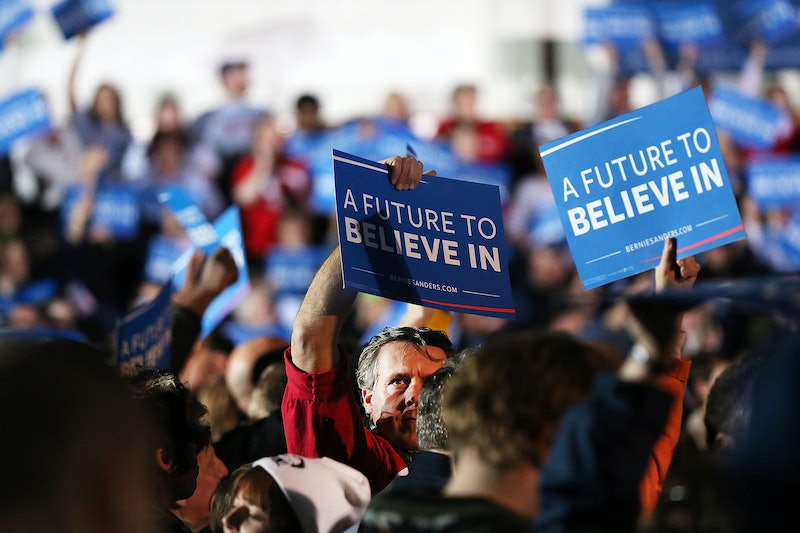 There are few things more gratifying than seeing something that you've supported succeed. In the case of some New Hampshire voters on Tuesday evening, that came through Vermont Sen. Bernie Sanders' win over Hillary Clinton in the primary. Thanks to social media, you could see the pure jubilation of the moment when Bernie Sanders' headquarters learned the New Hampshire primary had been called by CNN for the candidate.

If you were expecting a long New Hampshire watch party, you were inevitably disappointed. Major networks called the Democratic race just minutes after polls closed for Sanders, and the GOP primary for Donald Trump. But before the coverage switched to the second place winners (or, uh, at least for the Republican race), there was a brief focus on the celebrations at the respective camps' headquarters.

CNN reporter MJ Lee was on the ground at Sanders' Concord, New Hampshire, headquarters at the exact moment that TVs tuned to CNN announced that the network called the primary for Sanders. It was undeniably a poignant moment, with supporters on bleachers and waving "A Future To Believe In" signs in celebration, reminding all of us that we do have a place in the making the elections tick.

No matter who you voted for, Democratic or Republican, the sight of hundreds of people going nuts after seeing the candidate they support pull out a win is pretty affirming. It's not hard to see how this is especially important for Sanders supporters, who have kept standing behind the candidate despite hearing that he is a long-shot for the Democratic nomination.

Still, the New Hampshire win shouldn't have been too much of a surprise. It was widely speculated that Sanders would take the state, which is essentially in his own backyard. But let's not take that away from the people who turned out at Sanders' rally. The cheers heard on the video are kind of an affirming point of pride for people who have been told "no" over and over, who believe that there is great change that's coming to the country. More importantly, they believe that they are a part of that change.

So congratulations, Bernie. You and your supporters deserve a night of celebration, because it's going to be a hard road ahead. Luckily for the candidate, it seems like he'll have loyal supporters behind him the entire way.