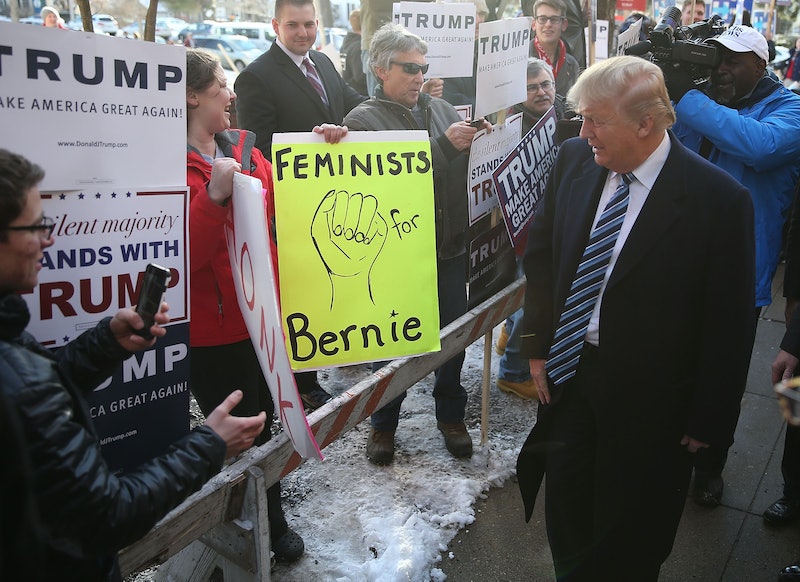 It happened. On Tuesday night, Donald Trump won the New Hampshire primary by a landslide. The reality star / real estate tycoon beat Ohio governor John Kasich with 33.9 percent of the vote, compared to Kasich's 15.5 percent. Trump lost the Iowa caucuses to Ted Cruz, but his first-place finish in New Hampshire puts him back in the top spot. As for the Democrats, Bernie Sanders won the primary over Hillary Clinton, with 59 percent to her 39 percent. Clinton had squeaked out the win in Iowa by less than one percent of the vote, but Sanders won by a "yuuuuge" margin on Tuesday. Now that the Republicans and Democrats have their New Hampshire winners, we can look to this one photo to sum up their differences.

Sure, it's that simple.

Trump was visiting a polling center in Manchester when this picture was taken. Among the many supporters holding their white-and-blue signs encouraging him to make America great again, there was one Sanders fan in the crowd holding a neon yellow sign that read: "Feminists for Bernie." The woman in the red jacket holding the sign had a giant smile on her face, and another giant sign in her other hand that read "honk."

One can only imagine she was on the street earlier, imploring passersby to blow their horn to show that they, too, are feminists standing with Sanders. Trump would not have been a honker.

The GOP frontrunner seemed to stare down a sign touting his opponent's feminism. Of course, one cannot confirm whether he was even looking directly at the sign, or if he had any negative feeling toward it. But Trump's history when it comes to women's rights, let alone common decency toward women, makes it all too easy to reckon that he didn't like what he saw.

See you all in South Carolina. And lady in red? Bring your sign.