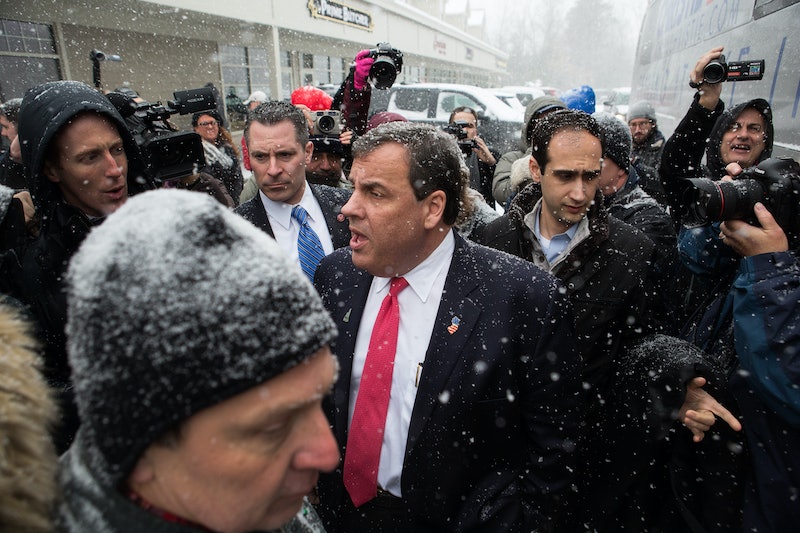 The results are in for New Hampshire's primaries, and they don't look good for New Jersey Gov. Chris Christie, who is reportedly heading home after Tuesday to "take a deep breath." After a poor turnout in New Hampshire — following last week's poor turnout in Iowa, where he finished in tenth place — the Republican candidate's campaign could be nearing its end. Donald Trump took first place in New Hampshire's Republican primaries, followed by John Kasich, Ted Cruz, Jeb Bush, Marco Rubio, and then Christie, who came in sixth. This was a crucial race for Christie, as well as other moderate candidates, like Bush and Rubio, as it determined whether they stood a chance during the rest of the country's primaries. And with 65 percent of the votes counted, Christie only had 8 percent.

The Republican hopeful will be heading back to New Jersey on Wednesday instead of continuing directly to South Carolina to campaign ahead of their Feb. 20 primaries. He plans to evaluate his campaign prospects moving forward. (TBT to last week's Iowa caucuses, when Ben Carson reportedly abandoned his campaign to do laundry.)

In a speech he made on Tuesday after hearing the primary results, Christie — who still seemed slightly hopeful about the potential turnout — told his supporters:

We're going to take a deep breath see what the final results are tomorrow ... because so many New Hampshire residents came out to vote today, it's going to take a while to count these votes so we want to see exactly what happens. By tomorrow morning, tomorrow afternoon, we should know...that's going to allow us to make a decision about how we move from here in this race, but there's no reason to go to sit in South Carolina in a hotel room to hear that.

Leading up to Tuesday's primaries, Christie spent $18 million on ad campaigns in the state, hoping to reach moderate voters who might still be undecided over who they would be voting for in the Republican primary. Christie reportedly had high hopes about what the results might be on Tuesday. In an interview on his campaign bus, he told Yahoo! Politics, “I feel really good today. I don’t know what that’s going to translate into.” Christie also tweeted earlier on Feb. 9, "I love New Hampshire. I am comfortable to have my fate in your hands."

But the fact that Christie isn't heading to South Carolina or Nevada, the next two primary states, is a good sign that the Republican might be drawing the bridge behind him.