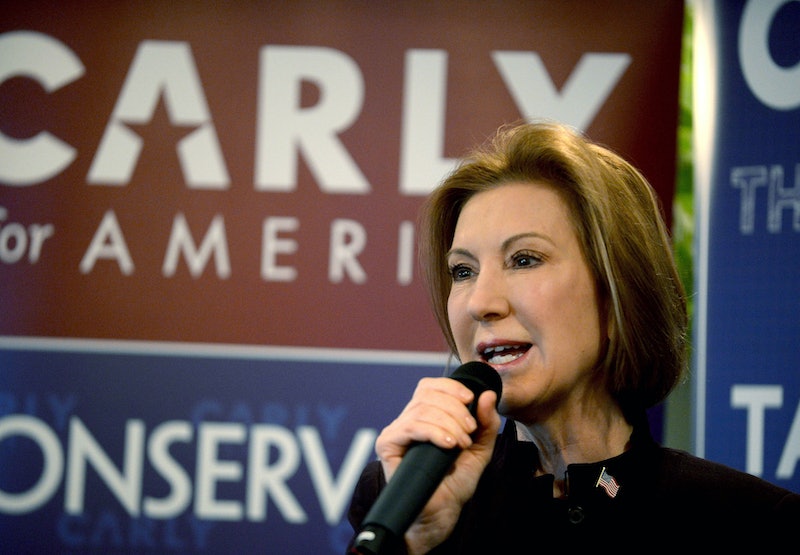 She was excluded from the last Republican debate, and she fell toward the bottom of the pack during Tuesday's primary in New Hampshire, but Carly Fiorina shows no signs of dropping out of the race to the White House just yet. Instead, her campaign says that she'll continue on as planned to South Carolina and Nevada, the next two states to vote. At this point, though, it seems like the good signs for her campaign are few and far between.

Before all the votes were even counted, it was clear that Fiorina would not be a strong contender coming out of New Hampshire. With more than half of the results in, Fiorina held less than 5 percent of support, surpassing only retired neurosurgeon Ben Carson on the crowded ballot of Republican candidates. It's true that Fiorina was probably one of the least-known candidates on that ballot Tuesday, as she hasn't yet been able to stand on a prime-time debate stage in 2016. This is because of criteria, which she sees as unfair, set out by the media organizations holding the debates. Still, Fiorina signaled on Tuesday that she would continue her campaign despite the loss.

Speaking at a country club in Manchester, New Hampshire Tuesday night, Fiorina said, "I'm not going to sit down and be quiet, and neither are you." The former Hewlett-Packard CEO stood on stage with her husband Frank while Tom Petty's "I Won't Back Down" played in the background. Similarly, Fiorina's campaign confirmed to Politico on Tuesday night that the candidate would continue to follow a predetermined calendar, which includes stops in South Carolina and Nevada in the coming weeks.

So it seems that Fiorina will remain in the race — for now, at least. Not all of her once-fellow candidates have demonstrated the same perseverance. Former Pennsylvania Sen. Rick Santorum and former Arkansas Gov. Mike Huckabee dropped out of the GOP race last week, following the Iowa caucus. Surprisingly, former Virginia Gov. Jim Gilmore participated in the New Hampshire primary, receiving even less of the vote than Fiorina. It remains to be seen if Gilmore will drop out following his performance. New Jersey Gov. Chris Christie announced that he was going home to New Jersey to "take a deep breath" on Tuesday night as the results were still rolling in from precincts around New Hampshire.

Ultimately, Fiorina's chances of making a comeback in the election seem dim at this point. No Republican has gotten their party's presidential nomination without winning either Iowa or New Hampshire since the 1970s. Certainly, there are several candidates continuing on who also haven't won either of those states, but Fiorina's chances seem even lower than theirs.