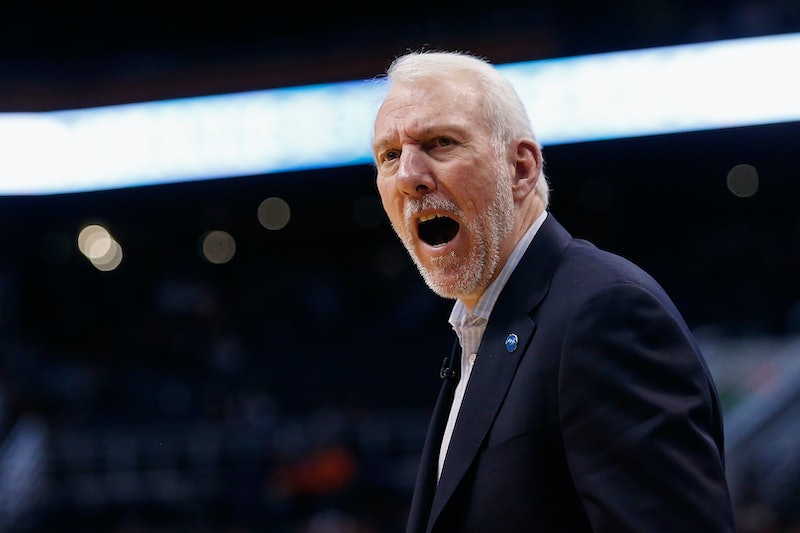 Elections tend to stir some real raw emotion from those close to campaigns, whether they be the candidates themselves, avid supporters, or political junkies. But voting results can also bring out the best and the worst in those you don't usually expect to take politics so personally. So if you were looking for a casual, simple Tuesday evening filled with three-pointers and personal fouls, and void of any primary election crossover, you didn't get your wish. What you did get was some hardcore judgment concerning New Hampshire residents' voting preferences by one of the biggest names in the NBA. San Antonio Spurs coach Gregg Popovich's reaction to the New Hampshire primary results is everything you could ever hope for in a head shake of disappointment.

While election officials were tallying votes after polls had closed on Tuesday, the Spurs were in the midst of taking on the Miami Heat at the American Airlines Arena. But Popovich didn't have long to stay in celebratory mode after the Spurs win, because a post-game Q&A session with sports reporter David Aldridge of TNT meant coming into contact with people who knew what had happened elsewhere in the country during the previous several hours. And good ol' Pop just couldn't help inquiring about the Granite State's primary outcome.

Popovich asked Aldridge, "Who is it?" to which he got a crystal clear, "Sanders and uh... Trump," in response. The Spurs coach first appeared dumbfounded, remaining silent for a second or two. Then came the unmistakable *smh* by Pop. The man has known disappointment in his time with the NBA, but apparently he has never experienced the kind of letdown that he did on Tuesday at the discovering of two election winners.

What you can't be sure of is the real cause of Popovich's glorious head shake. The NBA coach has shown a clear preference for one side of the political aisle: he had donated exclusively to the Democratic party, ESPN reported in 2006, and he gave $5,000 to President Obama's reelection campaign in 2012. So you can reasonably assume Popovich wasn't rooting for Trump to score a slam dunk in New Hampshire.

The fact that Pop is probably not the biggest supporter of Donald Trump doesn't necessarily mean, though, that he even cares all that much who from the Republican Party wins in the primaries. It's just as possible that Popovich is all in for Hill, and so in his very deliberate facial expression, was lamenting Bernie Sanders's win in New Hampshire.