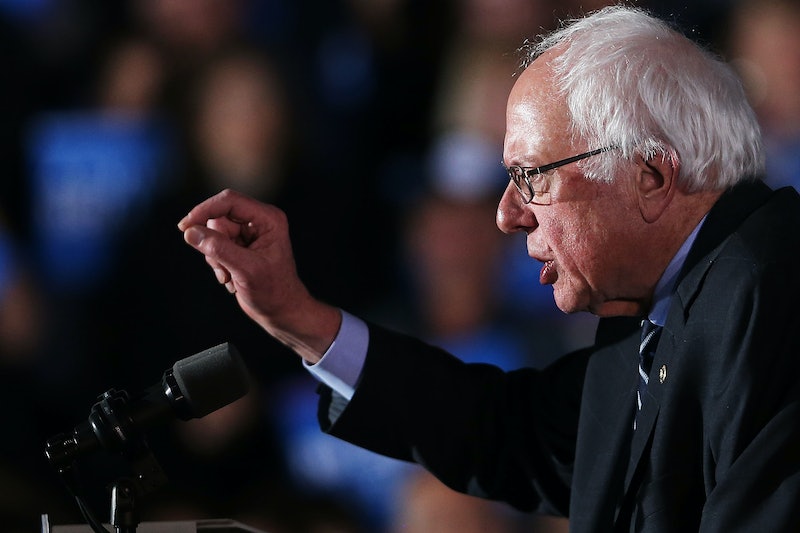 New Hampshire really "felt the bern" Tuesday night when voters took to the polls in the state's presidential primary, and Bernie Sanders secured the state's Democratic primary with 59.9 percent of votes. While this is a big win for the Vermont senator — who Megyn Kelly accidentally called "Bernie Sandals," and Chris Hayes referred to as "Bernie Sandwiches" — the Internet's usual memes and jokes stole the candidate's presidential thunder. But from the sandals, to the sandwiches, to Sanders' assault on Wall Street, there was one New Hampshire primary meme in particular that is probably the most important and hilarious Internet meme of the night.

The meme that stole the show played on the 1997 drama Good Will Hunting, starring Matt Damon and the late Robin Williams. The image parodies a scene in the movie where Damon's character approaches his rival, Clark, played by Scott William Winters, at a Dunkin Donuts after Damon gets Skylar's (played by Minnie Driver) phone number. The classic scene, which gave popularity to a now-classic movie line, ends with Damon's character holding up a piece of paper in the window to show Clark that he got their shared love interest's phone number. He asks, "How do you like them apples?"

Check out the hilarious Sanders versus Clinton version below:

After Clinton's narrow win over Sanders in Iowa's Democratic Caucus on Feb. 1, Sanders' win in New Hampshire is huge for the anti-establishment candidate, who beat out the former secretary of state by 20 points. According to a CBS News poll, 82 percent of New Hampshire women between the ages of 18-29 voted for Sanders. This comes just a few days after feminist activist Gloria Steinem called out young female supporters of Bernie for doing so only because "the boys are with Bernie." (Ms. Steinem, with all due respect: Young women deserve a lot more autonomy when it comes to our presidential vote!) Either way, the Democratic candidates went head-to-head in the days leading up to the New Hampshire primaries, with their first one-on-one debate on Feb. 4 and a heated social media exchange the day before when they duked it out over who is the more progressive candidate over Twitter.

Sanders tweeted, "You can be a moderate. You can be a progressive. But you cannot be a moderate and a progressive," to which Clinton responded, "This shouldn't be a debate about who gets to define 'progressive' — it should be about who will get real results for American families." And based on the results of New Hampshire's primaries, it looks like as of now, Democratic New Hampshirites have decided that they want Sanders' political revolution.

But with this big win under his belt at the end of the day, the most important thing that Sanders has to ask the Clinton camp is, "How do you like them apples?"