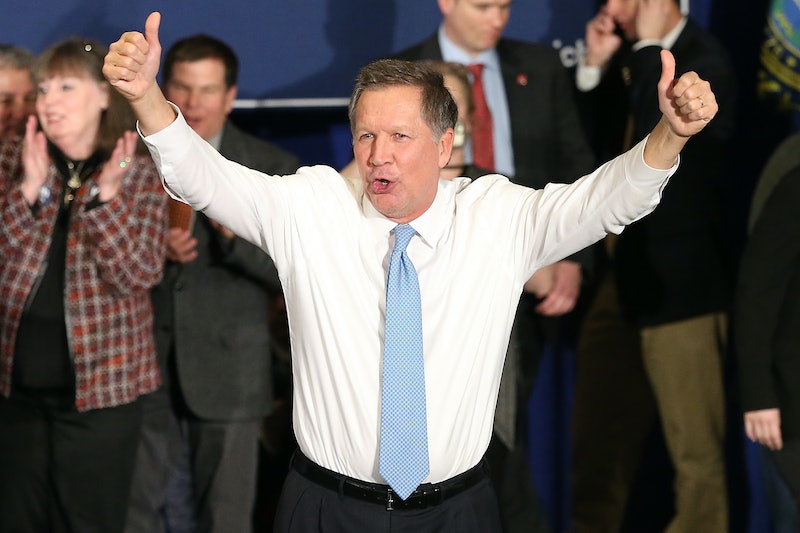 Tuesday's primary election in the state of New Hampshire brought few surprises for Granite State residents and the rest of the country. Both Bernie Sanders and Donald Trump, who had shown sizable leads in the polls, won for their respective parties as expected. And despite John Kasich's failure to gain widespread traction among national voters, he was expected to do well in New Hampshire and eventually nabbed a second place spot in the state's GOP race. One statistic from Tuesday's election, though, did come as a bit of a shock for, well, everyone. GOP candidate John Kasich was actually trending on Google during the New Hampshire primary, meaning that Americans still know (or at least are interested in) the Ohio governor.

It all started with a small New Hampshire town called Dixville Notch, where residents were among the first in the state to cast their votes in the primary election. After reports were released that Kasich beat Trump 3:2 in the small town's vote, and the Ohio governor began living up to the projections that New Hampshire would be "his" state, Kasich earned the title of one of the state's top-searched candidates. For the search, "Vote for [candidate's name]," Kasich was in fact the state's top-searched candidate of the evening.

Even in the context of general search interest among New Hampshire residents on Tuesday evening, the number of searches for Kasich's name at several times met or exceeded searches for frontrunner Donald Trump's name. Just before 8 p.m. ET, prior to projected winners being announced, Kasich surpassed Trump on Google search rankings, a feat no other Republican candidate accomplished.

And although no data has been released specifically on what Americans thought of Kasich's second-place victory speech, the governor appeared to stand out just as much at the end of the night — in spite of having experienced what many would consider a loss — as he did on the search engine earlier that evening. The Ohio governor spoke of the importance of slowing down and showing kindness to others in order to bring the country back to a better place.

You see, it doesn't take government. It takes our hearts. Our hearts to change America. ... I've become convinced even more about what it takes to win a political campaign and what it takes for somebody to be a leader. ... From this day forward I'm going to go slower, and spend my time listening, and healing, and helping, and bringing people together.

Where has this man been all our lives? Oh, right. He was there, overwhelmingly overshadowed by the campaign's loud and proud talkers.