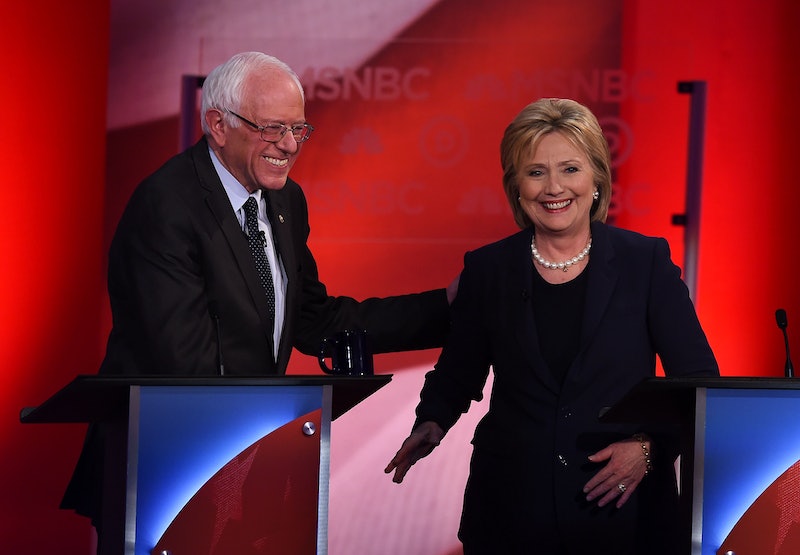 Whatever you think about Bernie Bros, it's difficult to argue against the fact that Hillary Clinton isn't treated fairly by her opponents. Normally, it's the Republicans who pull the dirty shots, but not always, especially during the Democratic primaries, when even fellow Democrats' attacks can make you cringe. Some Fox News pundits got straight to it after her Iowa caucus victory speech, noting her "unpleasant" voice and "shrieks." Geraldo Rivera even said, "I'm serious about this, she may be hard of hearing." Sean Hannity even went so far as to bring up her status as grandmother, adding that she's "aging, out of ideas, often shrill."

That brings us to the hash tag #shrillary, as well as #shillary and #whyimnotvotingforhillary, which even trended shortly after the initial announcement she'd run. That said, it's when the criticisms come from fellow Democrats that the Clinton camp probably gets worried.

Bill Clinton accused Sanders supporters over the weekend of "attacks that are literally too profane often, not to mention sexist, to repeat." Jezebel's Joanna Rothkopf infiltrated some Bernie Bros, and noted that they do exist, but the Sanders camp has tried to get them under control. Mike Casca, Sanders' rapid response director, has asked supporters to be respectful. Even in Rothkopf's piece, she notes that Bernie supporters stood up for her after she posted a trollling comment about Hillary's electability.

Many of these insults, though, are cringeworthy. For both Clinton and Sanders' sakes, they ought to stop.

A Man Telling A Woman To Shut Up?

Not Cool To Photoshop In Wrinkles

Wall Street Would Be Fair, But...

Then there's this NSFW attack that's a Hillary mosaic made of... you don't want to know. Let's just call them little Bernie bros.

No matter who you're supporting this primary season, if you're a Democrat don't lose sight of the bigger fish to fry, the Republicans. Mean Internet memes might be funny to you but offensive to others. Only be working together and playing nice can you guarantee a united front against the likes of Trump.