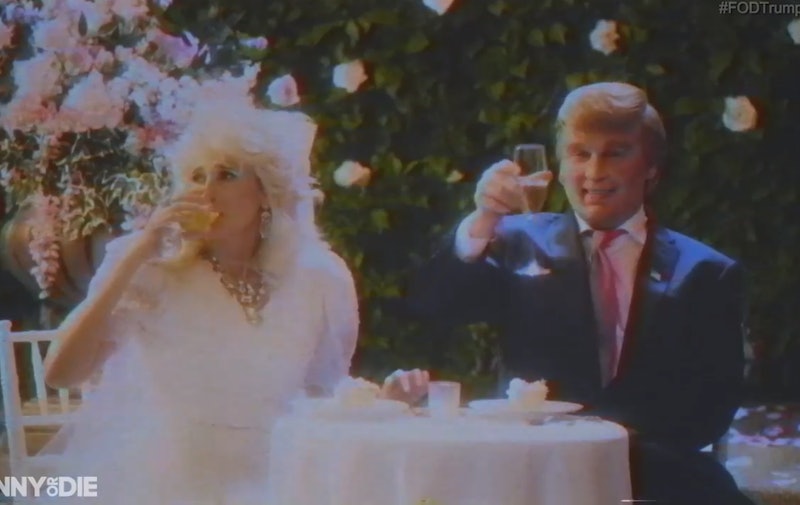 What's more entertaining than Donald Trump? Johnny Depp as Donald Trump in Funny or Die's Trump biopic, which is helping America laugh through the pain of the businessman's victory in the New Hampshire primary Tuesday. Depp has taken on a lot of incredible roles over the years, but this may be his best performance yet. Sporting Trump's signature blonde combover, bushy eyebrows, fancy suits, and New York accent, Depp perfectly captures the presidential hopeful in Funny or Die Presents Donald Trump’s The Art of the Deal: The Movie, released Wednesday.

Trump squashed his GOP opponents in New Hampshire with 35 percent of the vote, followed by John Kasich, who garnered a comparatively low 16 percent. Of course, skeptics hoping that Trump's lead in the polls wouldn't translate into real votes were disappointed that he actually won the nation's first primary. If you fall into that category, then this epic faux-biopic mocking the real estate mogul may lift your spirits. Named after Trump's book Trump: The Art of the Deal, the film portrays him making business deals, partying, and chasing women, and is full of outrageous lines that only Trump would say. At the beginning, the narrator (Ron Howard) explains that Trump wrote, directed, and starred in the made-for-TV movie in 1988. According to FoD, "As legend has it, when the film was preempted for Monday Night Football, a furious Trump pulled the movie, and no one has seen the delightfully dated masterpiece since."

Though believed to have been lost in the "Cybill Shepherd blouse fire of 1989," a copy of the film was apparently discovered in a yard sale outside of Phoenix. "I had to physically wrestle it from a nice woman named Jenny," Howard says in the film. Because it's meant to be from the '80s, the picture isn't super clear, but the fashion trends on display definitely make up for it.

The hilarious biopic begins with a 10-year-old Trump staring at a photo of a boy standing in front of the Taj Mahal and vowing to one day buy his own Taj Mahal (an explanation for why he went on to purchase the Trump Taj Mahal casino in Atlantic City). Along with Depp, Jack McBrayer, Patton Oswalt, Alfred Molina, Henry Winkler, and Andy Richter make appearances in the film, and Michaela Watkins plays his first wife, Ivana.

The timing of the film's release couldn't have been better, as the country grapples with the fact that Trump's campaign really does have strong support. If his New Hampshire win sent you into deep despair, know that at least this incredibly funny video came of his presidential bid. Watch the full biopic at Funny or Die.