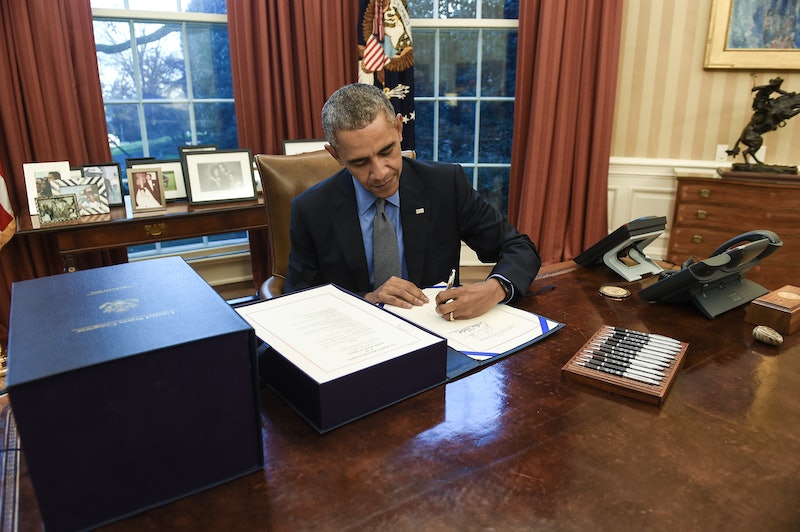 President Obama's 2017 budget — the final budget he will prepare as president — proposes some pretty significant cuts. It's not often that a Democratic president makes headlines for budget cuts, but Obama's proposal seems to make a lot of sense, for both his party and for the country. In a move that will likely anger the Republican majorities in both the House of Representatives and the Senate, Obama's budget eliminates funding for abstinence-only sex education in schools.

Currently, the U.S. Department of Health and Human Services offers grants to states and territories for teaching abstinence-based curriculums in sex education classes. Obama has proposed cutting this funding completely, thereby removing a huge incentive for states to teach such programs. Ultimately, Obama's recommended cut represents a realistic vision for the future of sex education in the U.S., as research has typically demonstrated that teaching abstinence does not effectively reduce rates of teenage pregnancy.

The problem is that congressional Republicans probably won't see it that way. Sex education has long remained a moral dilemma for lawmakers in Congress, and it's likely that the debate will reemerge later this year, as Congress sets out to shape and approve Obama's budget.

Over more than 25 years, the federal government has spent more than $1.5 billion supporting abstinence-based education. This isn't the first time that the Obama administration has worked to reduce that spending — and indeed, abstinence education spending has fluctuated, declining in some years only to be reinstated the next. All the while, research has shown that abstinence education is neither entirely effective nor entirely popular among Americans.

In 2011, researchers from the University of Georgia found that abstinence-based education actually correlated positively with cases of teenage pregnancy. That's not to say that focusing on abstinence encouraged teenage pregnancy, but it certainly demonstrates that such curriculums doesn't effectively prevent youth pregnancy. Although there's plenty of research out there to back this finding up, the issue isn't so cut and dry. For instance, a study published just a year earlier claimed that abstinence-only education effectively delayed sex among sixth- and seventh-graders.

Americans remain divided over the right course of action in sex education, but probably less so than you might think. According to the pro-choice group NARAL, an overwhelming majority — more than 80 percent — of Americans support a blended curriculum that emphasizes the benefits of abstinence without ignoring the practical lessons of condom and contraceptive use. Still, faith-based groups and ultra-conservative politicians are known for strongly supporting abstinence-only programs.

By cutting federal funding for abstinence education in his proposed budget, the president has signaled that it's time for these groups and politicians to be realistic about sex education. As with most things in government, though, it's not that easy. Now, Congress has until the start of the new fiscal year on Oct. 1 to debate this cut, along with Obama's other proposed line items.