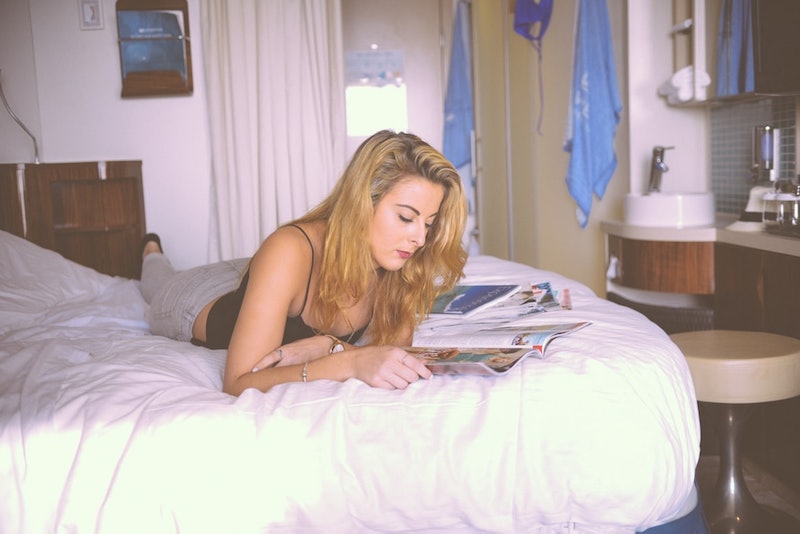 A study from researchers at the University of Bristol and Cardiff University released in February finds that women are less likely to be represented in media, whether as subjects or creators, even in pictures. Groups like the Women's Media Center and many other organizations that research media and representation have already told us that women are underrepresented in bylines, but this new study goes a step further, highlighting that most media isn't just by men, but about them. The particularly large scope and quantitative structure of this study makes it stand out — and it also raises questions about how if things are this bad for women, how underrepresented other minority populations like the LGBQT community, people of color, and disabled people are.

The study drew upon 2.3 million individual pieces of media pulled from 950 online news outlets over the course of a six month period, and the researchers further narrowed it to a dataset of 2.1 million instances of named persons and 1.4 million images with distinguishable faces and genders, all using automated methods. Obviously, there's some contextual room for mistakes, since names and faces do not always map reliably to gender, but they clearly banked on a small margin of error, as they discussed in their methodology section.

"We found," said the researchers, "that males were represented more often than females in both images and text, but in proportions that changed across topics, news outlets and mode. Moreover, the proportion of females was consistently higher in images than in text, for virtually all topics and news outlets; women were more likely to be represented visually than they were mentioned as a news actor or source." Women, it turns out, are to be seen and not heard in media, though fashion turned out to be a heavily female-dominated outlier, unsurprisingly. Fox News, incidentally, was the prime offender with respect to gender representation.

The ongoing story in Flint, MI, in which contaminated water poisoned an entire majority-Black city for months before the media took notice, highlights the issue of media representation.

What the study clearly tells us is that the media needs to take a proactive approach with respect to representations of women, because many outlets are sidelining women as a special interest category. Changing the landscape requires conscious curation of images and news subjects, as well as conscious hiring and commission decisions — for an example, look to the way color-conscious casting is changing the theater landscape. Relying on "merit" and "newsworthiness" doesn't fix the gender imbalance in modern media, or these results wouldn't be so extreme.

Why These Studies Matter

Studies on unequal representation can have a shaming effect, calling the media to account for their biases. For example, the Center for Study of Women in Television and Film routinely conducts studies exploring representation in these media, and has found a steady upward trend for women in response to its widely publicized studies — but in its recent "It's a Man's (Celluloid) World," Dr. Martha M. Lauzen noted that the bar hadn't noticeably moved on roles for women of color. Her research illustrates the importance of using an intersectional approach, as a casual glance might suggest that things are better for women, but a closer look at the data shows this isn't true for all women.

Underrepresented populations tend to include people of color, disabled people, the trans community, and the LGBQ community. The ongoing story in Flint, MI, in which contaminated water poisoned an entire majority-Black city for months before the media took notice, highlights the issue of media representation. At In These Times, Susan J. Dougles asked: "Without Black Lives Matter, would Flint's water crisis have made headlines?," underscoring the fact that minority communities have to agitate aggressively to make the news.

It's not just Flint that goes with scant news coverage — the murders of trans women rarely appear in the news, huge disability rights protests usually don't appear anywhere with the exception of disability-specific outlets, and while the LGBQ community gets more representation, it certainly doesn't enjoy parity, as seen for example in studies like GLAAD's annual "Where Are We On TV" report. These inequalities aren't the result of less "newsworthiness" on the part of the communities involved, but, rather, a history of social marginalization.

How We Can Make Media Studies More Intersectional

Anecdotes, as researchers are fond of saying, are not data. We need research to determine if intuitive assumptions about who we see and hear from in the media are true. The methodology of this study isn't precisely replicable in this case — computer algorithms can't tell if "Jane Doe" is cis or trans, or determine if the subject of a photo is disabled unless she has an obvious physical marker of a disability like a cane, walker, or wheelchair. Similarly, such technologies can't magically identify lesbians from image recognition alone, and bylines don't necessarily provide information about the race of the writer, and race isn't necessarily easily visually identified either.

Given these constraints, conducting research to explore other identities would require manual data collection, with researchers reading over selected media and analyzing individual instances to see who is depicted and discussed — self-reported surveys are notoriously unreliable and not an ideal research model. But even if researchers have to use a manual review and a much smaller dataset, it would be worth it. It would be even more worth it if they took an intersectional approach. How many images of disabled people depict white people? When trans people are covered in the media, how many are trans women of color? Are gay white men overrepresented? This kind of data would allow us to see where the biggest gaps in equitable coverage lie.

Smaller-scale studies like GLAAD's research, for example, aren't quantitative or broad enough — and it focuses on pop culture, not news media, though it does explore some intersectional issues. Other studies, like Beth A. Haller's "News Coverage of Disability Issues," conducted in 1998, are both outdated and single-issue focused. We need more research with multiple studies confirming similar findings to understand the scope of the problem.

Culturally, we have a great deal of work to do, and media profoundly shapes how we relate to the world. If we don't see marginalized communities in media, we assume that this is because they are somehow unfit or incapable of being businesspeople, scientists, actors, politicians, and much, much more. Consciously striving towards parity by working to actively balance subjects and creators against the status quo isn't just about pie in the sky dreaming: It will have a substantive effect on how we run the world, and on how the next generation relates to their own potential.

Think of a day when little Black girls see Black businesswomen on the front page, when trans teens encounter articles about trans doctors, when disabled youth see features about disabled politicians, and what that will mean for us, culturally. It would be a huge disruption of cultural norms, and one that's been a long time coming.