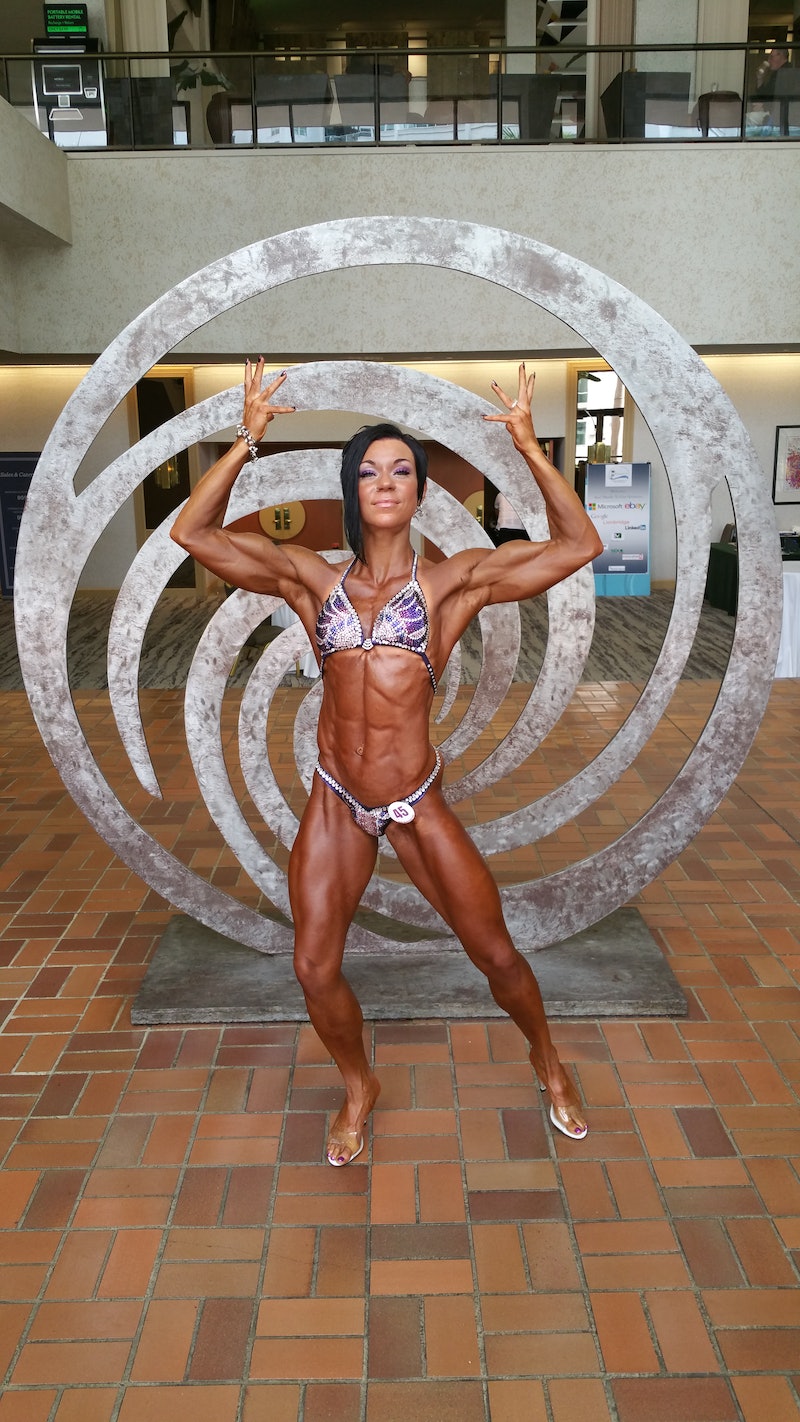 A decade into her fitness and bodybuilding journey, Angela Yeo is still perfectly willing to admit that she has terrible stage fright. Even loving your body can't take away the pressure that goes with showcasing one's muscles to an intimidatingly large crowd. The discomfort in front of the judges doesn't show on the pro bodybuilder's face or in her poses, though. The Toledo, Ohio resident has made seriously fast moves in the last three years to top podium spots at competitions hosted by the Professional National Bodybuilding Association and the Drug-Free Athletes Coalition. Because, stage fright or no, Yeo embraces every aspect of her lifestyle, from making personal training her full-time career to facing her fear of displaying her body before an audience. It's all part of her mission to achieve her desired physique with only her own approval in mind.

Yeo says her pull toward bodybuilding all started with a subscription to Oxygen magazine in 2006. "I really would read each one cover to cover," Yeo says. "I still have some old ones that are just totally note-bound with little stickers and highlighted. I pored over them like they were precious to me." Yeo remembers seeing model and pro bodybuilder Jelena Abbou on the cover of what she says was probably her first copy of the magazine (given to her by her husband Jamie), and being struck both by how exotic and by how strong the woman appeared. It was in those magazines that the now-31-year-old learned what goes into a fit lifestyle, and this was her catalyst to search for more knowledge on muscle groups and nutrition.

Yeo says that over the years, she's come to view female lifters with unique vibes, like Abbou or Dana Linn Bailey, as role models. In the case of Bailey, there seemed to exist a contrast between herself and other bodybuilders, and Yeo related to this. "She lifted different," Yeo says. "She felt different like I felt different."

And in bodybuilding, narrowing one's focus to the individual level and understanding the differences in one's own body really matters. The Temperance, Michigan native says there's a lot about the sport that relies on knowing that you're doing what's right for your body in particular. So when Yeo is having a bad day, she can immediately recognize that turning to her favorite muscle groups — glutes or shoulders — for that day's training sessions will boost her mood.

This level of self-awareness is a quality Yeo only acquired through years of constant training. Even her relationship with gym equipment has evolved over time. When Yeo first transitioned into the sport, her workouts were done in a home gym that lacked any and all leg equipment. "I had a rockin' upper body, rockin' core, but no legs," she says matter-of-factly.

Since then, Yeo has worked on her leg muscles, and judges haven't been disappointed with the results. She saw her first win in 2013, the year she started competing, right at home in Ohio. Later that year, she was awarded Ms. Figure Open Champion at the Natural Universe competition, as well as two silver medals for Ms. Figure at the Natural Olympia. In 2014, she took home the gold in that category.

At the moment, Yeo is in her off-season, but that doesn't mean weeks of rest and relaxation. There are more contests in her future, but the PNBA and DFAC pro isn't talking just yet about which ones she has in mind. And while Yeo is between shows, she plans to work the event where years earlier she "originally found her tribe," the Arnold Classic Expo, as a representative of natural athlete company P4P Muscle.

The bit about being a natural athlete is important to note, since all leagues are supposed to test for use of steroids in competitions, but not all do in practice. That everything about Yeo's physical appearance can be attributed to her dedicated training is a serious point of pride for her. "I choose to compete in leagues where I’ve been polygraphed," she says. "I've been tested at WABA standards, which is actually Olympic-level drug testing."

Of course, not everyone believes her. When she joined the current gym where she trains, Yeo says it was easy to differentiate between the guys in the weight room who respected her right off the bat and the ones who thought that no woman could achieve a body like her's without the help of steroids. But something Yeo has found to be true throughout her bodybuilding career is that the judgments of others seem to fall away when "you're really focused on how much you love what you do."

This focus on her personal wants and needs appears to be the foundation of Yeo's success in the sport. When she announced to friends at a New Year's Eve party last year that she would be moving into physique competitions, she made clear that the choice was made for herself, and herself only. "I didn’t even say I wanted to win, but I said I just wanted to do well," Yeo explains.

That decision turned out to be a good one. At the 2015 North American Naturals competition in July, Yeo went home as the Ms. Physique Open Champion. In November, she was awarded the Ms. Physique Professional Gold Medal at the Natural Olympia. And while Yeo says she could never really pick up on any aspect of the athletic world when she was a kid, it seems bodybuilding was perfect for her from the start.

"I've always been really expressive," says Yeo. "I would write a lot and work on art a lot. There always had to be some way to communicate." Yeo has found a career that allows her to continue doing just that. Molding her body is her own personal form of artistic expression. "My body is my mind’s greatest creation," she says.