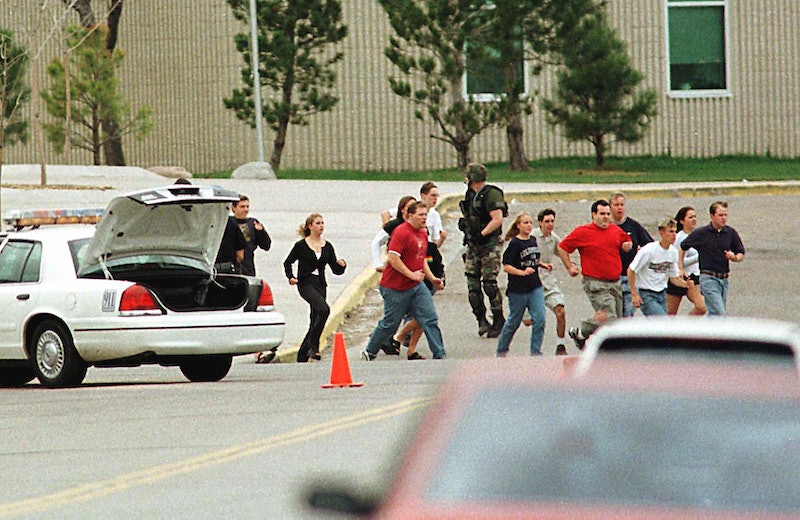 It's been almost 17 years since teenagers Eric Harris and Dylan Klebold killed 15 people — including themselves — at Columbine High School in Littleton, Colorado. Since then, the Columbine High School massacre has been remembered as one of the most infamous school shootings in U.S. history, and it has even been blamed for inspiring more recent shootings at other schools. Still, as infamous as it was, Columbine wasn't the first, or the deadliest, school shooting in America.

On April 20, 1999, Harris and Klebold opened fire inside their high school near Denver. They also planted bombs, although the explosives never detonated. All in all, they killed 12 students, one teacher, and themselves, and they wounded 21 others. On Friday, Klebold's mother, Susan, gave her first-ever television interview, speaking with ABC News's Diane Sawyer. Her memoir, reportedly titled A Mother's Reckoning, will be published next week, with profits going to mental health charities and research.

Klebold has had several years to reflect on her son's violent act and tragic death, but the story that follows her around has perhaps never been more relevant. Now, talk of her book has reignited the conversation not just about Columbine, but about the long history of mass shootings in the U.S., including recent tragedies at Sandy Hook Elementary in Newtown, Connecticut, and Umpqua Community College in Roseburg, Oregon.

A mass shooting is defined by the FBI as a shooting that kills four or more people, excluding the shooter or shooters. Using this definition, the history of mass school shootings in the United States dates back to even before the U.S. officially became a country. In 1764, three men entered a schoolhouse near present-day Greencastle, Pennsylvania, and reportedly killed 10 people. It wasn't until 1966, though, that the next mass shooting — or, at least, the next incident that would readily be recognized as a mass shooting today — occurred.

In August of that year, a 25-year-old man named Charles Whitman went on a 96-minute shooting spree from an observation deck at the University of Texas-Austin, killing 17 people and wounding 31 others in an attack that sounds eerily reminiscent of the stories that you're all too used to hearing today. Whitman also murdered his wife and mother earlier that day before continuing on to the university — not unlike Adam Lanza, who shot and killed his mother before opening fire at Sandy Hook Elementary in 2012.

As tragic as it was, Columbine wasn't the deadliest mass shooting at a U.S. school, either. In 2007, a massacre at Virginia Tech in Blacksburg, Virginia, left 33 people, including the shooter, dead and 17 wounded. Ultimately, it seems that virtually no conversation about gun violence in the U.S. would be complete without mentioning the mass casualties that have occurred at the hands of mentally troubled and otherwise disturbed young people on school grounds.