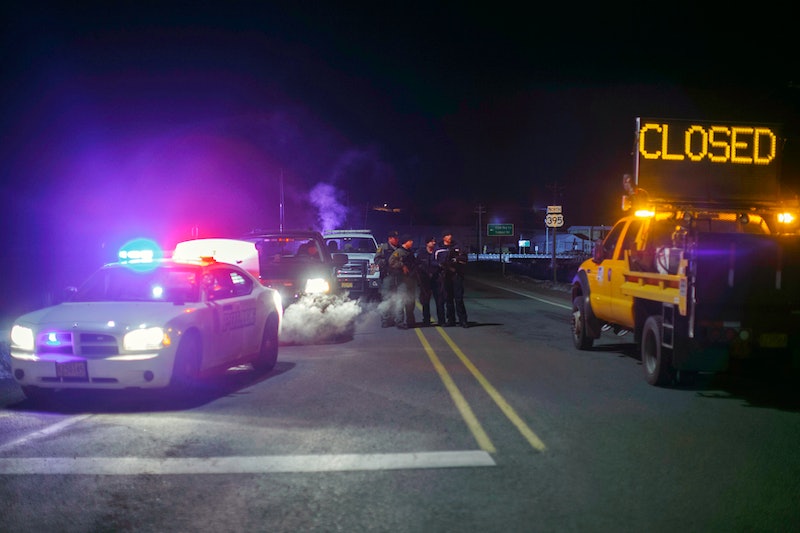 Live from Malheur National Wildlife Refuge, the Oregon standoff was streaming on YouTube as the FBI threatened to move in on the armed men who have occupied federal lands for more than a month. In an apparent three-way call between a YouTube personality located in Washington state, a group in Nevada, and the Malheur camp, the remaining four militia members seemed to agree to surrender to the FBI. They reported that they will spend the night in the building, and then surrender in the morning when members from an outside group and a clergy member arrive to help facilitate the transfer of weapons. The militants claimed victory, in their own way, with a spokesman stating that their team "outsmarted" the FBI. Later on in the stream, they requested the chance to speak with the Reverend Billy Graham on air.

After hours on the phone, the remaining occupiers decided to return to their campsite to retire for the evening. The group from Nevada who negotiated the standoff has apparently been in contact with the FBI and has received assurances that they will be allowed to assist in facilitating the surrender.

The stream was much livelier earlier on in the evening, when occupier Sean Anderson noticed vehicles moving toward their campsite. According to The Oregonian, Anderson reported fearing for his life and the lives of his companions. He reportedly asked FBI officials: "Did your boss send you here to kill innocent Americans?" and issued a call for help from the livestreaming community: "They have way more guns than us. We need help. ... We will not fire until we're fired upon."

Despite their forthcoming surrender, The Oregonian reports there is still the matter of the federal charges. A grand jury in Portland has returned indictments against 16 of the militants, including the four holdouts. The laundry list of charges include "conspiring to prevent employees of the U.S. Fish & Wildlife Service from working at the refuge, taking over the property with guns and intimidating the people of Harney County," occupying federal property "while using and carrying firearms," and "using social media and other means of communication to recruit and encourage others to join them."

It will be interesting to see how the group fares when they get their day in court, especially on the counts of using social media and "other means of communication" to recruit others to their cause. If found guilty, it could set a potentially chilling precedent against the use of social media by activist groups, students, and journalists in domestic courts.