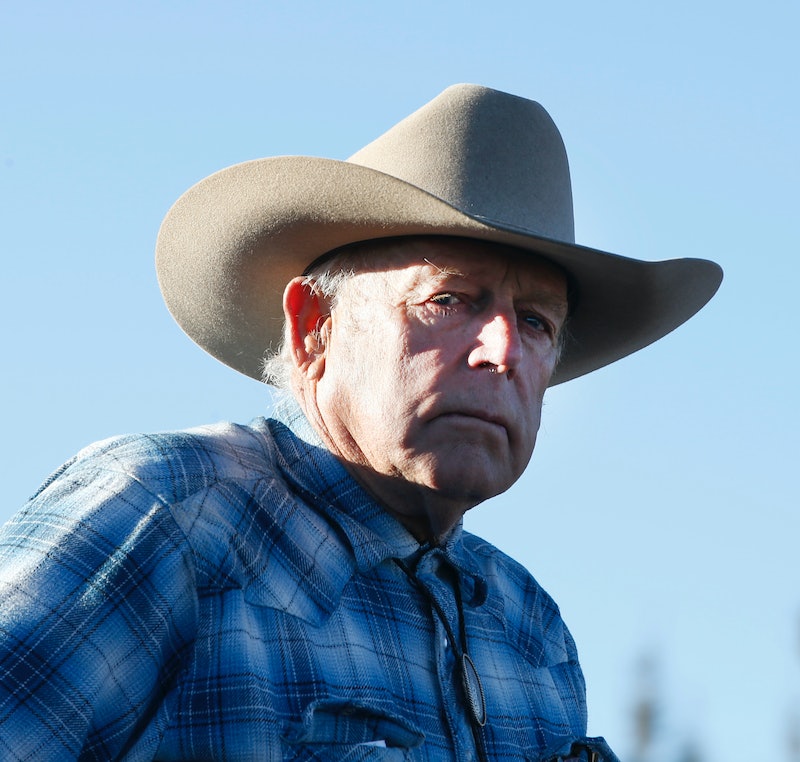 The cattle rancher from Nevada who started an armed standoff with the feds, and encouraged his sons to follow suit at an Oregon wildlife refuge last month, is now in custody. On Wednesday, the FBI arrested Cliven Bundy in Portland, and the wannabe militia leader faces a conspiracy charge to interfere with a federal officer — just like his sons. Bundy was at the airport and was planning to travel to a refuge outside of Burns, Oregon. Four occupiers remain at the refuge, and have promised to turn themselves in Thursday morning.

The four stayed at the Malheur National Wildlife Refuge even after Cliven's sons Ammon and Ryan were arrested in a traffic stop that resulted in the death of their companion Robert "LaVoy" Finicum earlier this month. After infiltrating the refuge late Tuesday night, authorities announced Wednesday that they would move in on the group — following two weeks of a relatively quiet standoff — after one of the four rode an ATV outside the militia's established barricades at the refuge.

After hours of deliberations and negotiations on Wednesday that were livestreamed on YouTube, the four announced that they will spend the night before turning themselves in on Thursday morning, when an outside group and a clergyman — the son of Billy Graham — arrive to facilitate the transfer of weapons. The decision to turn themselves over to the authorities came after a tense evening, in which the occupiers yelled at the FBI to back off and prayed with supporters over the phone. An acquaintance of one of the occupiers made the proceedings available to the some 60,000 people who listened to it all play out live.

The four will also face a federal conspiracy charge. Cliven Bundy's arrest stemmed from charges related to his 2014 armed standoff with authorities from the U.S. Bureau of Land Management. He owes the agency about $1 million in unpaid fees for grazing his cattle on federal land. When they impounded his cattle that were on federal land, he and militia supporters confronted the agents, who in turn retreated to avoid bloodshed.

As Bundy Sr. heads to jail, he joins his sons, who have been locked up since late January. Ammon, who led the Oregon standoff, has called for support from elected officials in the Western states (plus Ohio) that he and his fellow occupiers hail from. "You have constituents in federal custody. Please visit and contact them to voice your support for free speech, the right to assemble, and civil disobedience," he said in a recording from jail.

Wednesday marked the 40th day of the armed standoff with federal authorities. The right-wing, anti-government group has called itself the Citizens for Constitutional Freedom. They have been widely criticized, with some going so far as to call them domestic terrorists. They say that their occupation is in protest of the imprisonment of two ranchers who reportedly set fires on federal lands, as well as against government ownership and control of land in the area.