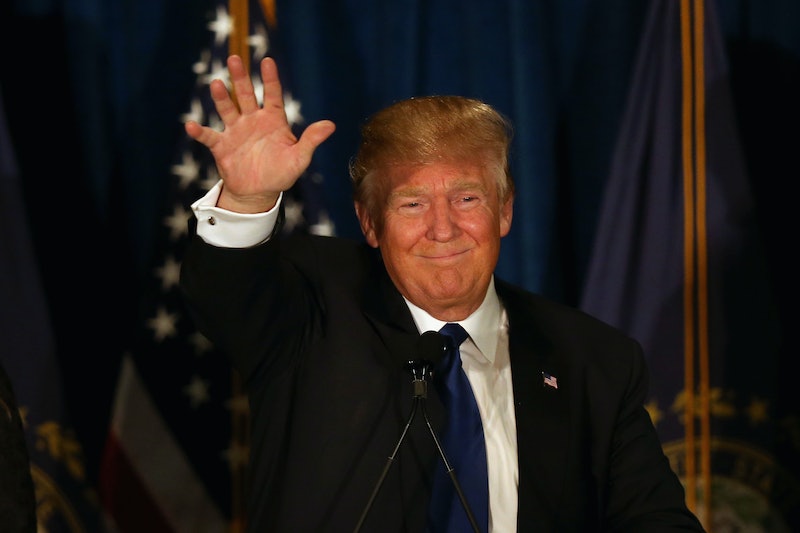 In an interview with a conservative French magazine, Valeurs actuelles , presidential candidate Donald Trump predicted the end of Europe as we know it. He also said that he sees no reason not to buddy up with Russian leader Vladimir Putin — despite, you know, Ukraine, their bombings of U.S. allies in Syria, and the recent macho buildup of troops near the Baltic NATO countries. He also insulted German Chancellor Angela Merkel over her handling of the refugee crisis and called the EU capital Brussels a breeding ground for terrorists. So, you know, that bodes well for strengthened relationships with countries that have been key U.S. allies since the end of World War II.

This was Trump's first in-depth interview with European media while on the campaign trail. Valeurs actuelles (“current values”) interviewed him at Trump Tower in New York the week before the Iowa caucuses. His outlook — which, in typical fashion, he blames on immigrants — is rather grim:

What's happening in Europe can lead to its collapse. It's dramatic what (Merkel) has allowed to happen, this flood ... If we don't deal with the situation competently and firmly, then yes, it's the end of Europe. You could face real revolutions ... I’m very good at predictions. I think you’re going to have in Europe a period of upheaval.

His assessment of the current situation in the EU is pretty pessimistic as well. "Unfortunately, France is not what it used to be, and neither is Paris," he said, describing some parts of the French capital (which as recently as January he seemed to think was in Germany) as "no-go zones." He also repeated criticisms of Brussels, home to many of the European Union institutions that have sought to tie Europe's many countries and its peoples together.

Just two weeks ago, he told Fox Business Network anchor Maria Bartiromo that the city was suffering because Muslim immigrants had failed to assimilate. "You go to Brussels — I was in Brussels a long time ago, 20 years ago, so beautiful, everything is so beautiful — it’s like living in a hellhole right now," Trump said, going further to imply that parts of Brussels, and Paris as well, want Sharia law to be implemented.

The most terrifying aspect of the interview is not what he said about our allies, though, but rather about the increasingly defiant Vladimir Putin of Russia, repeating past claims that the two would get along swimmingly, and noting the icy relationship the Russian leader has with Obama. "I think we could have very good relations with him. There’s no reason why America can’t get along with Russia on a certain number of issues, especially in the Middle East," he said.

Why? "He [Putin] said I was brilliant. That proves a certain smartness." Let's hope Kim Jong-un doesn't start throwing the Donald any birthday parties in North Korea. Assad might want to name a holiday after Trump in Syria (perhaps April 1?). Even though interpersonal relationships do matter in international relations, a simple compliment should not excuse years of abuse of power and invasions of foreign states (remember Georgia?).

Not to leave domestic politics completely out of the talk, he criticized French gun laws, saying that he always carries a gun with him (which, if true, would be illegal anytime he goes into a New York restaurant). He specifically referenced the November terror attacks in Paris at the Bataclan night club. "Had I been at the Bataclan, I can tell you I would have opened fire," Trump said.

This follows the talking points he gave at a speech in Texas in November, one day after the attacks. "When you look at Paris — you know the toughest gun laws in the world, Paris — nobody had guns but the bad guys. Nobody had guns. Nobody." He went on to say that if "our people" had guns, then the situation would have ended very differently.

If this interview gives any hint at a possible Trump take on foreign policy, then it's time to start worrying. If he gets the GOP nomination, start to prepare the applications for asylum in Canada or ... I'd say Mexico, but (thanks to Trump) that won't work. Europe might have been a good option too. Australia? The best option would be somewhere he can't find on the map.