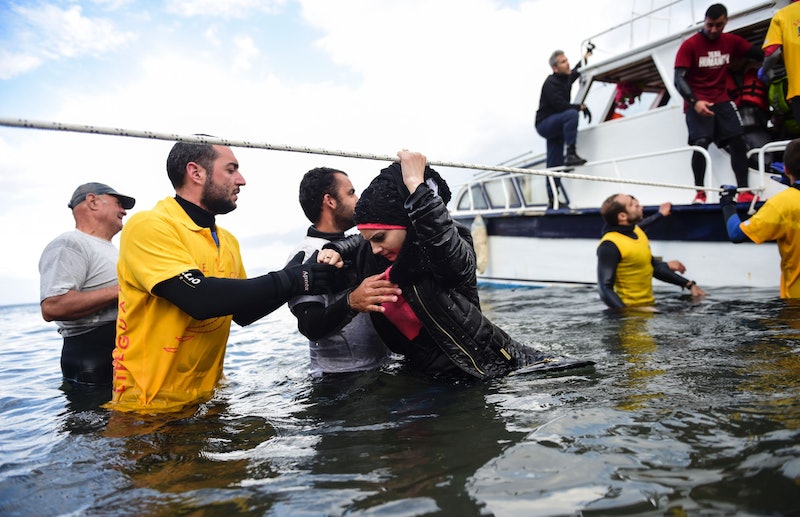 A new video was released by the Turkish Coast Guard that gives you an idea what's going on in the Aegean Sea. A Syrian refugee clings to the top of a sunken ship that had been filled with migrants, trying to make the journey from the Turkish shore to nearby Greek islands. This helps explain the steps taken by NATO Thursday. In an attempt to fight human smugglers, NATO will deploy ships to the Aegean Sea between Greece and Turkey.

The ships, which will come from Germany, Canada, Greece, and Turkey, will not be stopping or pushing back migrants' boats. Their focus will be on monitoring the area and providing intelligence to the European Union, which is in charge of the ultimate goal of stemming the flow of refugees. NATO will also monitor the Syrian border with Turkey to monitor smugglers' activities.

The video, shot from the helmet cam of a rescuer, begins in a helicopter, as Pelen Hussein, the Syrian refugee, holds on to a capsized boat — of which just the tip of the bow remains above water — while wearing a life jacket. He is spotted by the Turkish Coast Guard, and they send down a rescuer to get him. The rescuer tells him in English to jump into the water. He does, letting go of the boat and jumping toward the rescuer, who then fastens him on to the rope hanging from the helicopter. They're both shown being raised to safety.

The video continues on to say that Hussein was just one on a submerged boat that had been carrying 34. Some 27 of them drowned, including 11 children, according to the Turkish Coast Guard. AFP reported the name of the rescuer as Sgt. Tuncay Ceylan. Ceylan said that Hussein was on the verge of hypothermia and in "a state of shock" right after the rescue. Things did not immediately get easer, as Ceylan said:

When he came to himself a bit he started to cry. Probably his relatives came to his mind as there were a lot of corpses in the water.

Last year, nearly 3,800 migrants died in the Mediterranean. In 2016, some 410 have already suffered the same fate. The new plan was put into place to help Greece and Turkey "manage a human tragedy in a better way than we have managed to do so far."

Any intercepted migrants will be returned to Turkey, said German Defense Minister Ursula Von der Leyen. After that, what will happen to any rescued migrants remains a mystery. The EU and Turkey continue to quarrel over how to best address the crisis, both at the Syria-Turkey border and for those who have reached Europe's doorstep. Turkish President Recep Tayyip Erdogan said Thursday in Ankara that he could send some of the three million refugees currently in Turkey on to Europe if the European reaction to the refugee crisis isn't improved.

As the politicians quarrel, NATO has said it will get to work. Gen. Philip M. Breedlove, NATO's supreme allied commander for Europe, said that the plan had been started up in the last day: "This mission has literally come together in the last 20 hours, and I have been tasked now to go back and define the mission.” For the migrants' sake, may rescue efforts end up being a big focus.