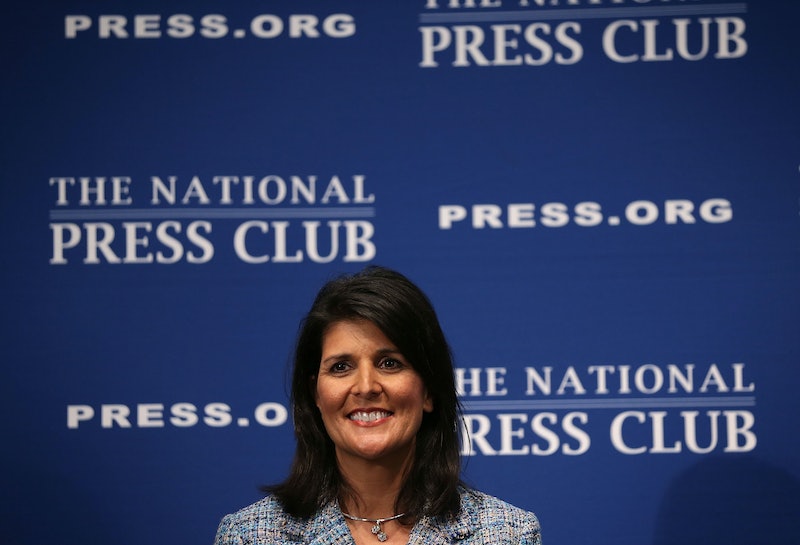 Update: On Wednesday, Feb. 17, sources told The Charleston Post and Courier that Haley would endorse Marco Rubio for president, giving him a much needed boost in his campaign and sparking speculation that she could be his vice president pick if he receives the Republican nomination.

Earlier: With only nine days remaining until the next contest in the 2016 presidential primaries, South Carolina Gov. Nikki Haley still hasn't endorsed a candidate. Republicans will host an open primary contest on Feb. 20 in the Palmetto State with a total of 50 delegates at stake — and none are of the "super" variety — so why would the most prominent elected official in the state hold off on making a mark on the race? The question of who Nikki Haley will support in the GOP primary will likely remain open, maybe even after the primary itself has concluded.

So, why would Haley, one of the strongest contenders for vice president that the Republican Party has to offer, hold off on announcing her support for a candidate? In all likelihood, she is trying to maximize her chances to be the GOP vice presidential nominee. Not only is she the youngest current governor in the nation, she is the first Indian-American woman to hold the position of governor, and after Louisiana Gov. Bobby Jindal, only the second Indian-American to win a gubernatorial race. A local Charleston paper, The Post and Courier, featured an interview with Winthrop University political science professor Scott Huffmon who reminded readers that governors who neglect to endorse a candidate outright might be on the short list for the vice presidential nomination.

“As long as whoever she endorses ends up winning the nomination, it would be very big for her,” Huffmon told The Post and Courier. In the last presidential race, Haley endorsed Mitt Romney for president relatively early, in December 2011, before Iowa had even come together to caucus. According to The Washington Post, Romney was an early supporter of her 2010 gubernatorial bid, so it is possible that Haley's endorsement in the primaries represented a quid pro quo arrangement between the two camps.

This year, the playing field is considerably different, with He Who Should Not Be Named and Canadian import Sen. Ted Cruz taking hugely ironic positions against immigration and immigrants themselves. Haley is a first-generation American, born in South Carolina to Indian Sikh parents — a college professor and a businesswoman — who arrived in America by way of Canada in the early 1970s. Out of the remaining GOP contestants, social moderates like Jeb Bush and John Kasich seem to be the most natural fit for a potential endorsement nod from Haley, who was is the first woman to hold the position of governor in South Carolina in the state's history.

Speculation that Haley may end up endorsing floundering Senator Marco Rubio, whose campaign is suffering after a series of embarrassing gaffes during the most recent GOP debate, has died down after she made a series of public remarks criticizing the Florida senator for his support of "amnesty" for illegal immigrants in the so-called "Gang of Eight" comprehensive immigration reform bill last year. Haley's remarks added pressure to Rubio's campaign, with Sean Sullivan of The Washington Post noting that "she gave fodder to Rubio's opponents, who can now say that the state's neutral Republican governor takes issue with at least part of Rubio's record on immigration."

Whomever Gov. Haley decides to endorse — or even if she will endorse anyone at all — will likely remain a subject of intense scrutiny as the remaining contenders push onwards toward Super Tuesday.