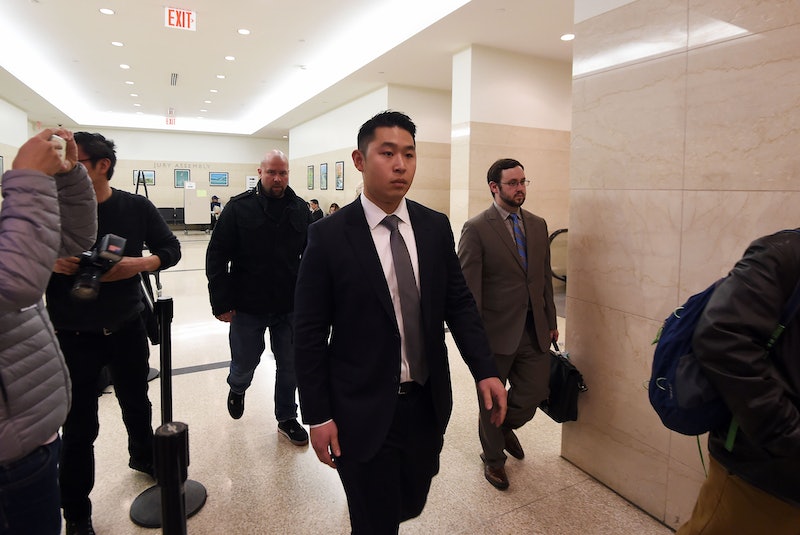 On Thursday, a jury convicted NYPD Officer Peter Liang, who shot Akai Gurley, of manslaughter and official misconduct. Officer Peter Liang was also facing charges of assault, reckless endangerment, and criminally negligent homicide for the shooting death of the 28-year-old Gurley in 2014. His sentencing is set for April 14, and he faces up to 15 years in prison.

The 28-year-old rookie officer, who was on his second "vertical patrol," fatally shot Gurley in a darkened stairwell of a housing project on Nov. 20, 2014. Gurley, who was unarmed, was making his way down the stairs at the Brooklyn apartment with his girlfriend rather than waiting for the elevator. According to Liang, a noise startled him and he fired his already drawn gun. The bullet ricocheted and struck Gurley, who was the father of two young daughters.

The prosecution argued that Liang, in addition to acting out of recklessness, did little to help the dying victim. Liang said during the trial that he didn't realize anyone was in the hallway after he flinched and fired his gun, and that when he beamed his flashlight after shooting he initially saw no one. Liang then argued with his partner on who report firing his weapon, and said that it was only after he went down the hallway to retrieve the bullet that he found Gurley.

Melissa Butler, the victim's girlfriend, said that after Gurley collapsed she attempted to perform CPR. Liang did not try to resuscitate the victim, and said that they should wait for professional help to arrive. This violates police protocol, something that Liang's defense team argued was a result of poor training at the police academy, which Liang had graduated from a year before the shooting. Liang also did not call for an ambulance after Gurley was shot. Defense introduced a police radio call in the trial that they argued would have been comparable to calling in an ambulance.

As The New York Times notes, officers in New York are rarely indicted, much less asked to stand trial before a grand jury, for deaths that occur in the line of duty. The paper notes that members of Gurley's family, who attended all of the two-week trial, viewed his death as part of the epidemic of over-policing of black communities across the country. Tensions were especially high in New York at the time of the shooting. Four months earlier, Eric Garner died after he was placed in a chokehold by police.