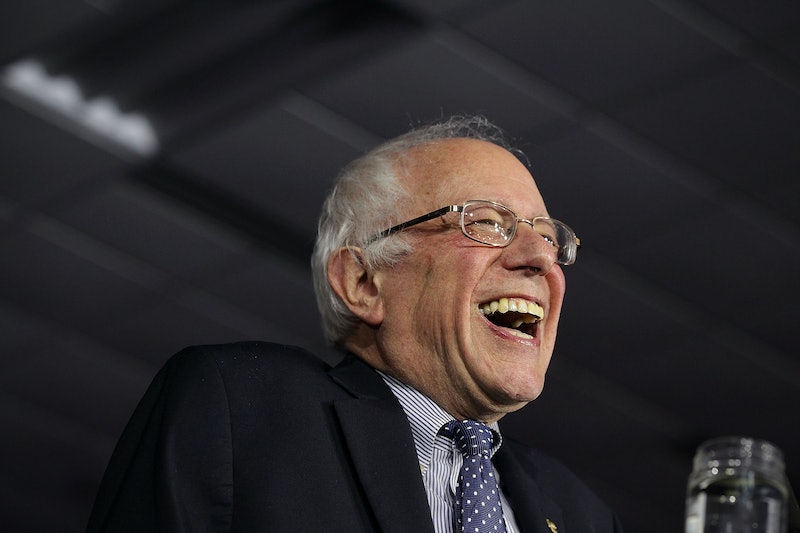 The American public has been witness to more than a few primary debates, not including Thursday evening's round hosted by PBS. It's no wild assumption, then, to think boredom could set in at yet another discussion of how to defeat ISIS. But leading candidates Hillary Clinton and Bernie Sanders have never failed to spice up the showdowns, just when viewers were on the verge of a yawn. When the first Dem debate got going post-commercial break without Clinton on stage, there was no way Hill was going to let slip by the opportunity to make a potty pun. Viewers could mute their televisions and merely look at Sanders's facial expressions in order to experience some solid amusement. So here are some hilarious Democratic debate memes and tweets from the Milwaukee round, though the witty presidential hopefuls never needed much help in the humor department.

Not everyone thought the second face-off between Hillary and Bernie would be the highlight of this year's television entertainment. A few folks on social media were preparing themselves for a fairly low-key showdown before the event got going, and there were even suggestions for a few stands-ins of the comedic type. I guess Sanders's wry sense of humor doesn't click with as many people as originally thought. But the candidate joked to voters in Iowa about his "GQ look." Who wouldn't love that?

Don't get me wrong. I could be easily persuaded to give large sums of money to see Amy Poehler (or Larry David, for that matter) in any role, since America's just not the same without Parks & Recreation and Curb Your Enthusiasm. However, Clinton and Sanders are in no way unaccustomed to tossing out a sarcastic joke or two.

2. What Question The Debate Watchers Really Want An Answer To

Americans watching the Milwaukee round from homes across the country surely have one thing on their mind, and it's not how much money Clinton actually received from Goldman Sachs: Can't the moderators just offer a quick question on the candidates' thoughts on Steven Avery?

The candidates clearly weren't coached enough, since Clinton only brought up the Wisconsin governor once. The former secretary of state sure got the audience response she was expecting with that single dig, though.

4. A Sanders For Valentine's Day

Six debates in and Bernie is still using the bit about his campaign funding methods in his opening statement. Americans get it Bernie. They can't buy you or your love. But can't they buy you (literally, you) in the name of love?

5. A Debate For The History Books

Textbooks, that is. Sanders was taking Americans back decades, and more decades, when a question about foreign policy and national security came up. Not sure how the 1953 Iranian coup was relevant in that particular conversation, but Bernie sure did try to make it seem so.

Sanders shared some truth with viewers when he explained that whites and blacks smoke marijuana at the same rate, but blacks are arrested at a significantly higher rate for crimes related to the drug. What he didn't get right was the colloquialism: Doing marijuana just doesn't sound right, Bern.

Making fun of Hill's outfit may not be the most original route for Dem debate jokes, since she's always had her own misunderstood style. That Clinton gets to be part of the Star Trek crew in this scenario makes it totally OK.

8. Sanders' Squad Does Not Include Henry Kissinger

Sanders laid the Kissinger hate on thick — and that's like molasses thick.

9. The Question About White People

Was there really a whole question dedicated to the feelings of white people?

10. The Return Of The Finger Wag

But, like, everyone knew that that wasn't going anywhere, right? Who would keep a fierce gesticulation like that locked away for more than a few minutes?

Is that an acceptable amount to ask for at the negotiating table? You should probably ask if benefits are included, too.