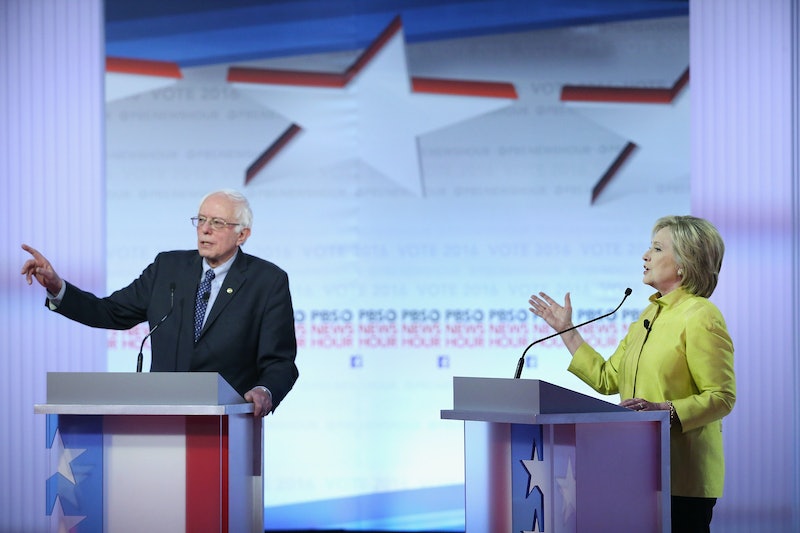 The sixth Democratic debate took place on Thursday at the University of Wisconsin in Milwaukee. Riding high off a New Hampshire primary win, it appeared as if Bernie Sanders was poised to continue that momentum leading into the final debate before Super Tuesday for the left. Sanders, nonetheless, still faced an uphill battle. Front-runner Hillary Clinton continues to have more delegates than Sanders, thanks primarily to an impressive showing of support from superdelegates — those officials and politicians who have free reign to show their support for whomever they please. Looking towards capitalizing on momentum as well as a national platform, the Democratic debate winner pulled no punches and Sanders did exactly that, doing whatever it takes to set himself apart from his fellow candidate.

A majority of the debate felt as if the two candidate would be forced to settle for a draw. Both Sanders and Clinton were calm, cool, and collected as they answered questions from moderators Gwen Ifill and Judy Woodruff on such hot button issues as foreign policy and racial inequality. Even Sanders' questioning of Ifill bringing up resentful working class white Americans offered up a surprisingly apt discussion of socioeconomic issues that affect all races, including that of substance abuse and mental health problems.

What truly set this debate apart was the fact that Clinton appeared to be defending her record in terms more akin to Sanders' platform. She repeatedly mentioned her support of Obamacare, slyly hinting that the president's idea of universal healthcare was spawned from her own Hillarycare in an attempt to outshine Sanders on an issue he has similarly felt passionately about for quite some time. Additionally, Clinton brought up the issue of Wall Street corruption on her own accord during her opening statement, attempting to beat Sanders to the punch at yet another issue he holds near and dear to his heart.

At every turn, Sanders challenged Clinton. It was not enough when the former secretary of state embraced Obama's ideals and stated that she would uphold his executive actions in regards to immigration reform. The Vermont senator squared off against Clinton on an important matter of suspect immigration practices during periods of major violence in Latin America in the mid- to late-2000s. It's the reason, Sanders said, that he voted against immigration reforms to be enacted in 2007. Issues of economic reform received similar treatment as Sanders repeatedly backed Clinton into a corner.

Sanders had hinted at the very real possibility of a more heated Democratic debate during his victory speech in New Hampshire, stating that "they're throwing everything at me except the kitchen sink, and I have the feeling that kitchen sink is coming pretty soon as well." Thursday night's event proved that the Vermont senator was willing to do whatever it took to set himself apart while also waging a surprisingly bitter war of words. The gloves have most certainly come off, and the very rhetoric of a Sanders-Clinton debate has drastically changed.

No statement of Clinton's appeared safe from Sanders, as his momentum hit a fever pitch when he criticized his fellow candidate for earning the admiration of the highly controversial former Secretary of State Henry Kissinger, a point she had brought up in the previous Democratic debate. Sanders proudly boasted that he was no friend of Kissinger's, appearing to blindside Clinton with his criticisms. The move marked a major turning point for the Democratic party as it seeks to settle on a presidential nominee.

Previous Democratic debates have included closing statements in which candidates praised their ability to unify themselves for the good of the party. This point marks a major contrast between those to the left and their Republican brethren, once trapped in an overcrowded presidential field. The GOP appeared to be the exact inverse of the Democrats in its many schisms that permeated far beyond presidential candidates and even plagued the right when picking a Speaker of the House. Thursday night's debate marked the first time that Sanders celebrated the differences between himself and his fellow candidate, proudly picking at every point in which he and Clinton were in disagreement.

This is exactly the purpose of such a debate, as candidates seek to show the American people their differences and why each point merits voter support. To have two overly similar candidates would ruin the very purpose of such an event. Sanders kept to his message while not only maintaining a slight edge over Clinton, but finding just enough of a second wind towards the end of the debate to push the event in his favor.