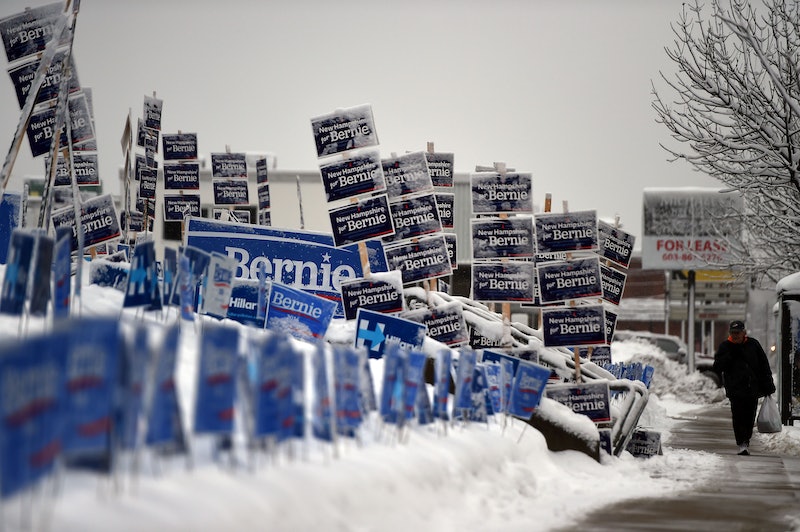 Ahead of Thursday night's Democratic debate, protestors from the Fight for $15 movement filled the press filing center to call for a $15 minimum wage. The protestors appear to be a part of a planned protest of fast food and other low paid workers, in which 1,000 people in Milwaukee, Wisconsin, where the sixth debate will be held, planned to walk out of work at noon to gather outside of the venue where Hillary Clinton and Vermont Sen. Bernie Sanders will take each other on.

According to Politico, the Fight for $15 group has not endorsed a candidate in the Democratic race, but the Service Employees International Union, which backs the push, has endorsed Hillary Clinton. The SEIU has not commented on the brief incident at the debate, after which protestors exited peacefully.

Journalists, being journalists, have documented the scene very well on Twitter. I guess that's what happen when you storm a media room:

There are also photos of the Fight for $15 group outside of the venue marching and holding banners.

Protestors have been outside of several of the debates, including walkouts in Charleston, South Carolina; Des Moines, Iowa; Milwaukee, Wisconsin; and Manchester, New Hampshire. There was also a walkout before the GOP debate in Wisconsin. Bernie Sanders, apparently listening to the protestors outside of the debate, addressed the issue of minimum wage as one of his first talking points in that debate on Jan. 17. Sanders supports a $15 minimum wage, while Clinton has advocated for the $12 minimum wage. Both of these are significantly higher than the current federal minimum wage, which is at $7.25.

The issue is particularly important for Wisconsin voters, as 46 percent of people in the state are paid under $15 an hour. The campaign says that 64 million Americans are paid under $15 per hour, which has made it a key issue in this campaign for Democrats, who seem amenable to at least some uptick in the minimum wage.