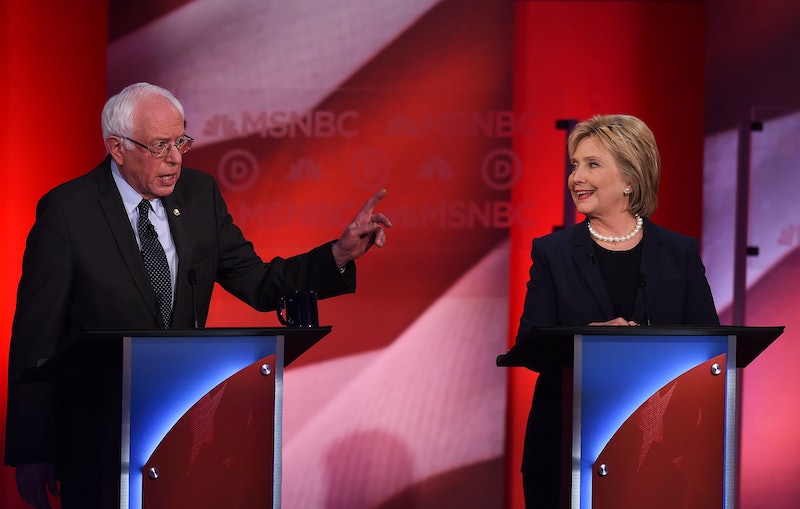 The sixth Democratic debate has proven that nothing is off the table as Bernie Sanders and Hillary Clinton faced off on Tuesday night at the University of Wisconsin in Milwaukee. Bernie Sanders went after Hillary Clinton's Henry Kissinger connection, criticizing the former secretary of state for proclaiming that she had Kissinger's approval. The attack even carried into a Twitter response, which reiterated Sanders' stance against Kissinger.

The barb came about due to a comment made by Clinton during the fifth Democratic debate in which the former secretary of state used Kissinger's praise to bolster her profile in her former role. Kissinger, a highly controversial state secretary himself, apparently took the time to condone Clinton's actions while she served under Obama. Clinton said:

I have had the opportunity to run a big agency. I was very flattered when Henry Kissinger said I ran the State Department better — better than anybody had run it in a long time. So I have an idea of what it’s going to take to make our government work more efficiently.

Sanders brought up the point and instead lashed out. He expounded upon Kissinger's disastrous domino theory during the Vietnam War that cost thousands of lives, as well as the former secretary of state's seemingly contradictory desire to watch out for such dangerous superpower countries as China and yet urge companies to outsource to the nation. The Vermont senator had some choice words about Kissinger shortly before PBS moderators Gwen Ifill and Judy Woodruff moved the line of questioning on to issues of U.S. relations with Russia. Sanders said:

This is the guy that, yeah, you're right, opened up relations with China and now pushed various types of trade agreements resulting in American brokers losing their jobs. As corporations moved to China the terrible authoritative communist dictatorship he warned us about. Now he's urging American companies to shut down and move to China. Not my kind of guy.

Clinton defended herself by claiming that she is not afraid to "listen to a wide variety of voices that have expertise in various" fields and not just those who agree with her. While the point is certainly a noble one, especially when it comes to dealing with bipartisan issues and aiming to unite the two parties as potential commander in chief, Sanders was having none of Clinton's explanation. As the race kicks into high gear, each candidate is using whatever fodder they can find to set themselves apart and above from their rival presidential hopeful. This feels like it won't be the last time that Sanders brings up the issue.