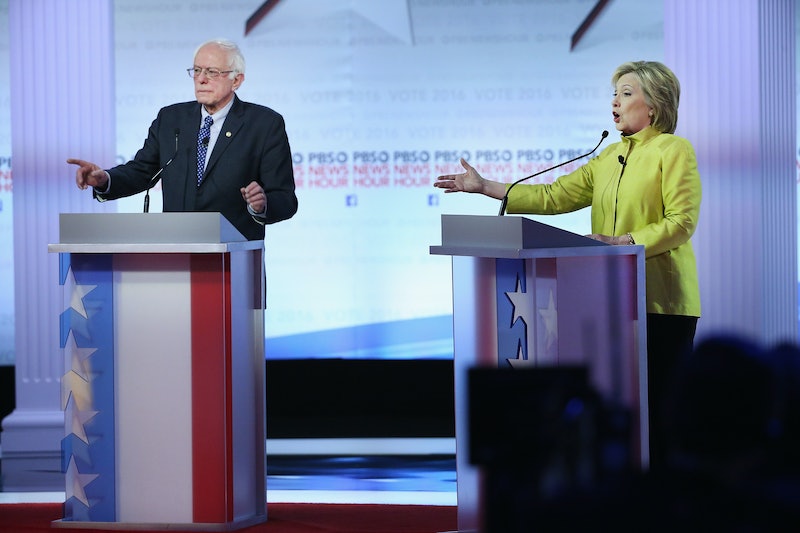 Focusing on the complicated relationship between the United States and Syria, Thursday's Democratic debate once again highlighted Sanders and Clinton's division in foreign policy. The two had previously sparred on the issue in a mid-December showdown, with this week's debate taking it a step further after a recent development pointed to an agreement with Russia for a Syrian ceasefire. Thursday night's question focused specifically on how the candidates would handle Russia when it came to their recent, increasingly volatile actions against the Middle Eastern country.

Both candidates agreed that the recent agreement with Russia, made as early as Thursday night by Secretary of State John Kerry, would be a way to further aid the United States in bringing their humanitarian efforts to Syria. The country has been rampaged by the Islamic State of Iraq and the Levant (ISIS), and Russia's recent bombing of Syria has only escalated the humanitarian crisis. Clinton and Sanders viewed the agreement as a necessary means to end Russia's aggression and begin their efforts in bringing down terrorist groups.

Their main distinction in views, however, came from their positions on Iran. Iran's involvement in the Syrian Civil War has helped to bolster the Syrian government, a government that has by and large been the cause of the country's humanitarian crises. They have been using their services to secure Syrian President Bashar al-Assad's power over the country. Iran has tried to keep their involvement under wraps, but in more recent months the Syrian ally could not be ignored.

As was seen in the debate, Clinton and Sanders fundamentally disagree on how to best deal with Iran and their involvement in the Syrian crisis. To put it simply, Clinton wants to divorce the United States and Syria from any diplomatic ties with Iran. Sanders, on the other hand, hopes to eventually engage with Iran to build a peaceful coalition.

Clinton has thrown her full support behind the Iranian nuclear agreement, which places a cap on the country's nuclear weapons program. Though she would like to see Iran stop their sponsorship of terrorism, she cannot envision an agenda where normalized relations would take a priority.

The Vermont senator sees it differently, however. He said of Iran:

[T]he idea that we some day maybe have decent relations with Iran ... that is something I want to achieve. And I believe that the best way to do that is to be aggressive, to be principled, but to have the goal of trying to improve relations. That's how you make peace in the world. You sit down and you work with people, you make demands of people, in this case demanding Iran stop the support of international terrorism.

Tactically, they also differ. Clinton believes that no Iranian troops should be on the ground in Syria and advocates for a no-fly zone. Conversely, Sanders has called for troops on the ground and opposes a no-fly zone, a position that puts him in company with President Obama.

Yet it is this essential chasm over choosing to engage with unfriendly countries that seems to be at the root of their disagreement. Clinton would like to altogether avoid it if possible. Sanders wants to build relations that would allow for this engagement to exist at all. Perhaps Sanders sums it up best in his final word on the matter: "It's easier to talk to your friends. It's harder to talk to your enemies. I think we should do both."