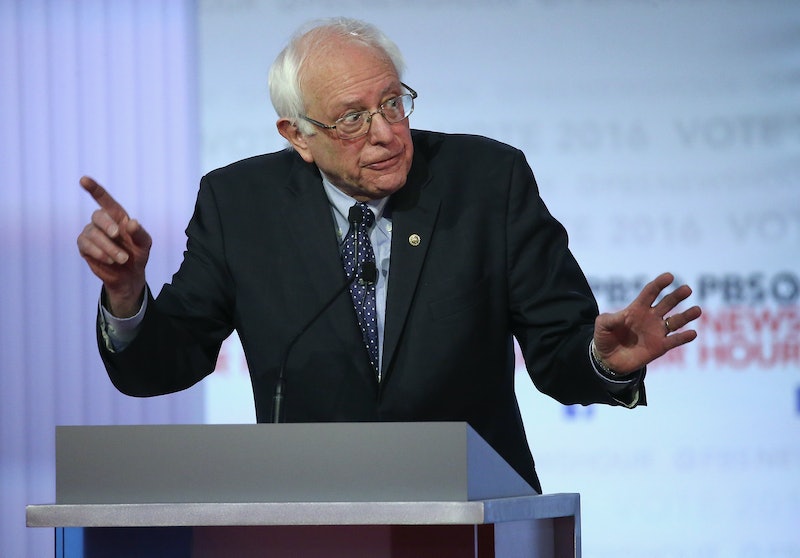 In the last few minutes of Thursday evening's Democratic debate, accusations and low blows were flowing freely between the two front-runner candidates. The subject of the candidates' jabs during one exchange didn't focus on the presidential hopefuls themselves, but rather President Obama. In debating about the current president's successes, Hillary Clinton accused Sanders of writing a book blurb critical of the Obama administration, but the dig is only kinda sorta based in truth.

In response to a question from a Facebook user asking which historical leader would have the most influence on Sanders' foreign policy decision-making, the Vermont senator gave an enthusiastic endorsement of FDR's leadership during the Great Depression. When Clinton was called on by moderators to follow up, she used her speaking time not to talk about Nelson Mandela's many achievements, but to focus instead on Sanders' remarks about President Obama's leadership:

Sanders did indeed pen an endorsement for a book by Bill Press entitled Buyer's Remorse: How Obama Let Progressives Down. So it wouldn't be a poor assumption based on the book's name to think that Sanders wasn't a fan of Obama's actions during his time in the White House. If you actually read the Vermont senator's paragraph praising the book, though, you'll find that Sanders doesn't say anything about President Obama.

The endorsement reads: "Bill Press makes the case why, long after taking the oath of office, the next president of the United States must keep rallying the people who elected him or her on behalf of progressive causes. That is the only way real change will happen. Read this book."

In his support of Press's book, then, Sanders seems only to be affirming the author's theory on what a progressive leader should look like. And Sanders made sure to set the record straight concerning the Buyer's Remorse blurb while on the University of Milwaukee debate stage.

... this blurb that you talk about, you know what the blurb said? The blurb said that the next president of the United States has got to be aggressive in bringing people into the political process. That's what I said. That is what I believe.

Sanders also appears to have a pretty good idea of who that next president should be.