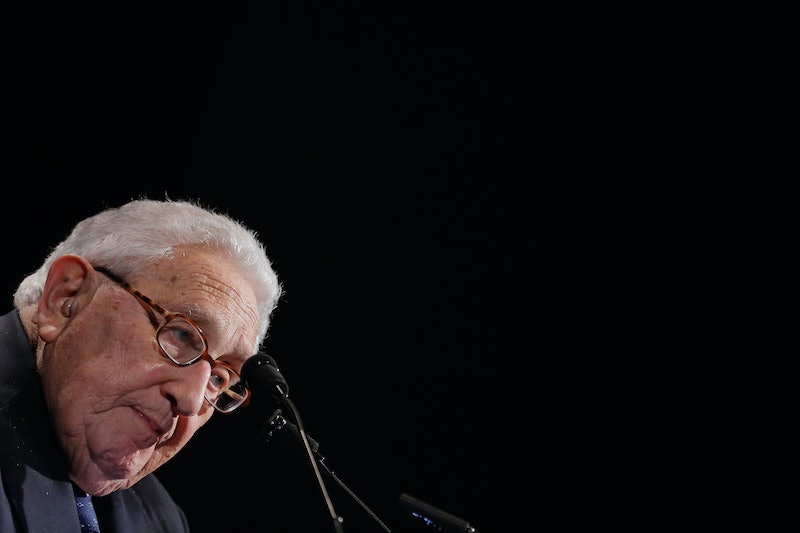 The Democratic presidential candidates have not often found themselves as passionately opposed as they did when the name of a controversial secretary of state was dropped during the PBS Newshour debate Thursday. The democratic socialist took a hard-line stance on the issue, declaring outright — lest anyone dare to think otherwise — Sen. Bernie Sanders is not friends with Henry Kissinger.

In an attempt to establish himself as a candidate with foreign policy cred, Sanders lashed out at Hillary Clinton's praise and connection to Kissinger. Citing Kissinger's role in the U.S. bombing of Cambodia in the 1970s, Sanders' criticized Clinton for hailing the former secretary of state as a supporter and mentor in her book:

Sanders went on to describe the instability Kissinger created in Cambodia as the catalyst that led to Pol Pot's dictatorship, the brutal Khmer Rouge regime, and, what he called, "one of the worst genocides in the history of the world."

"So count me in as somebody who will not be listening to Henry Kissinger," a passionate Sanders said in an effort to drive his point home.

Clinton countered by pointing to concerns voiced in multiple media outlets regarding Sanders lack of foreign policy experience and credentials. "Well I know journalists have asked who you do listen to on foreign policy, and we have yet to know who that is."

"Well, it ain't Henry Kissinger, that's for sure," a visibly agitated Sanders interrupted.

Someone (a comedic genius, that's who) went so far as to alter the Wikipedia entry on Kissinger to include his lack of friendship with Sanders, which was caught and shared via Twitter by Scott Benson (bless you, Benson). However, by the time the Democratic presidential candidates made their closing statements, the Wikipedia article was returned to its initial sans-Sanders state.

Given how heated and passionate the exchange between the two Democratic candidates became at the mention of Kissinger, one might think the former secretary of state was a central issue of the 2016 election narrative. The New York Times' Nicholas Kristof hit the nail on the head when he tweeted, "what does a Sanders foreign policy consist of other than hating Kissinger and deploring unintended consequences?" Sanders' loathing of Kissinger aside, the Vermont senator has yet to convince his critics of his ability to tackle foreign policy, which is becoming a bigger and bigger problem as voters head to the polls in primaries across the country.