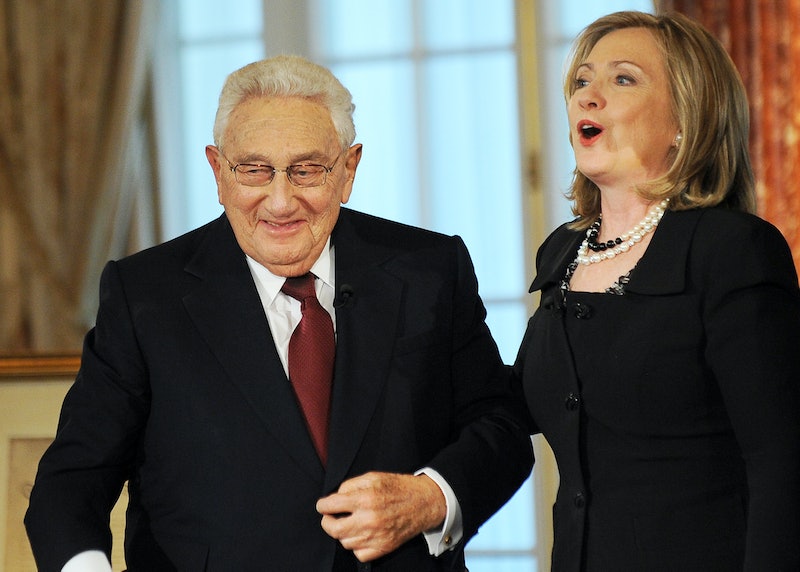 According to Bernie Sanders in Thursday night's Democratic debate, Hillary Clinton and the contentious character that is Henry Kissinger are friends. Since Sanders has a tendency to address the Iraq War, his criticism of Clinton's apparent relationship with the former secretary of state and prominent political scientist is likely somehow related to his recurrent point that he voted against the war. How close is Kissinger to Clinton, exactly? Well, according to quotes from Kissinger himself, it is clear that he and Clinton have known each other for some time.

To refresh memories, Kissinger was the national security adviser and subsequently the secretary of state under U.S. presidents Richard Nixon and Gerald Ford. Kissinger was allegedly involved in some serious war crimes against Indochina (Vietnam), Bangladesh, Chile, Cyprus, and East Timor, despite his rating by some scholars as the most effective secretary of state in the 50 years to 2015. He is the chairman of Kissinger Associates, Inc., an international consulting firm. He has an extensive political history, and has also authored a number of books, predominantly focusing on foreign policy. Apparently, he had offered President George W. Bush and Vice President Dick Cheney advice on the Iraq War, which placed him in a controversial position. So is Clinton a friend of Kissinger's, and why should it matter?

Back in 2014, USA Today quoted Kissinger remarking on his relationship to Secretary Clinton. He explained:

I’ve known her for many years now, and I respect her intellect. ... And she ran the State Department in the most effective way that I’ve ever seen.

In addition to his respect for her, he claimed she ran a more operative State Department than even he did. As he notes, he was "more chaotic." He also revealed further information to NPR back in September 2014 that may come across as highly controversial, at least to some:

I know Hillary as a person. And as a personal friend, I would say yes, she’d be a good president. But she’d put me under a great conflict of interest if she were a candidate, because I tend to support the Republicans… Yes, I’d be comfortable with her as the president.

Fascinating. He tends to swing Republican, but supports Clinton as a potential president. That could prove the exact ammunition Sanders needs to reveal that Clinton is a member of the establishment — or even potentially disloyal to the Democratic cause — but one would hope the politics remain issue-based, as opposed to resorting to allegiance-oriented mudslinging. As for Kissinger's relationship to the Iraq War?

He supported it back then, but has since remarked that if he knew then what he knows now, he would not have done so. In an interview with PRI's The World, he indicated that he believes the initial intentions to invade were pure, and not contrived for political and economic gain:

I don't believe it was concocted. I know that they sincerely believed that there were nuclear weapons there, because I talked to these individuals during the crisis. And, moreover, people forget that in 1998, at the end of the Clinton administration, the Senate by a vote of 98 to nothing voted that it should be our policy to overthrow Saddam [Hussein,] and Clinton signed that. So this was not just a concoction of one administration.

Like most other involved parties, he regrets what came of the invasion:

If I had known everything then that I know now, I probably would not have supported it. I thought it would be a quick operation to replace Saddam [Hussein.] I did not think it would lead to — and I would not have favored — a long-term occupation in order to reconstruct a society and to try to repeat the experiences of Germany and Japan in a country that had no comparable institutions. I even then thought that it was beyond the capacity of the United States, or maybe anybody, to turn Iraq into a Western-style democracy.

In other words, he believes those responsible meant well but made decisions that led to terrible events. Clinton also supported this war, initially, as Sanders often uses as a refrain in his speeches. Will such a relationship with Kissinger have any effect on Clinton's presidential campaign? At least Sanders seems to think it should.