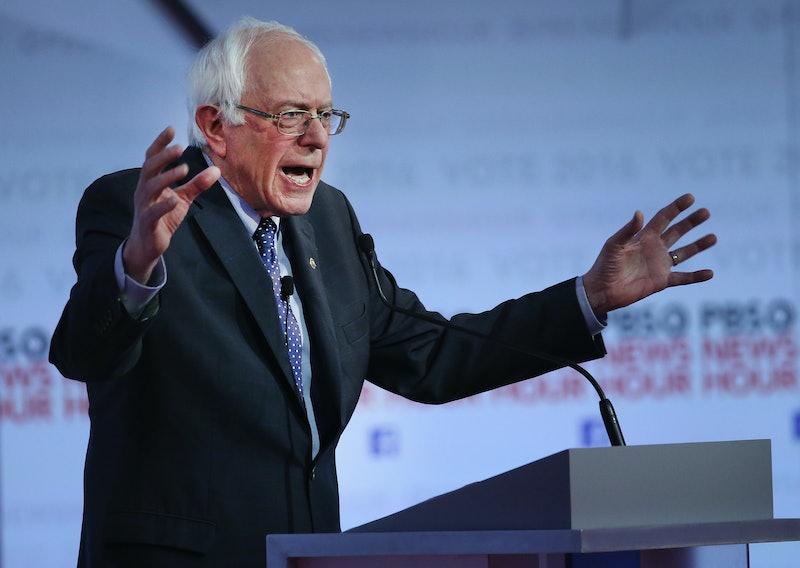 In a summation of the back-and-forth argument regarding the merits and shortcomings of President Obama during Thursday night's debate, Bernie Sanders made a sharp statement against Hillary Clinton after a long disagreement on whether or not he was supportive of the president, as Clinton had suggested he was not. But Sanders made his position on President Obama clear with this quote, stating that despite their occasional disagreements, he has championed behind the commander-in-chief for the majority of his political career.

Near the close of the debate, Sanders aptly reminded Clinton: "Well, one of us ran against Barack Obama. I was not that candidate." Clinton maintained a steely appearance at the comment but did not look happy. Sanders' words were met with surprised exclamations and cheers from the audience.

Sanders' main point in making this comment was to address Clinton's arguably overzealous support of President Obama, as well as to say it is within the Senator's democratic right to criticize him. This criticism, he reminds Clinton, is not to say that he distrusts or dislikes the president outright — only that he is able to not let his overall positive views of the president cloud his better judgement.

After claiming that Sanders had called the president "weak" on a number of occasions, Clinton summed up her argument with:

[T]he kind of criticism that we've heard from Senator Sanders about our president I expect from Republicans. I do not expect from someone running for the Democratic nomination to succeed President Obama.

It is true that Sanders has disagreed with Obama on a number of issues. For example, the president supports and wants to expand free trade, while Sanders opposes it. He has also criticized Obama for not acting soon enough on gun control.

But despite these differences, Sanders went on the defensive. He responded to Clinton:

I think it is really unfair to suggest that I have not been supportive of the president. I have been a strong ally with him on virtually every issue. Do senators have the right to disagree with the president? Have you ever disagreed with a president? I suspect you may have.

But still, it was Sanders' final "I was not that candidate" line that truly drove the point home. With this, he reminds voters that it was Clinton, not him, who had to get up on the debate stage and point-for-point disagree with then-senator Obama. Her opinions of both Obama and his actions as president can of course evolve, but Sanders nevertheless makes it clear: While Clinton was running against Obama, it was Sanders who was campaigning with him.