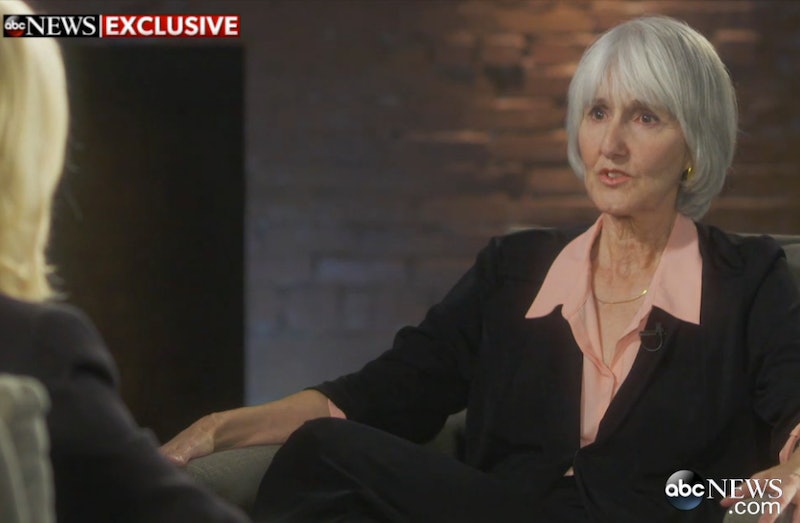 The shooting at Columbine High School in Colorado that left 13 dead and 24 injured happened almost 17 years ago, but the nation has not forgotten. On Friday night, ABC News' 20/20 will air an interview with Sue Klebold, the mother of one of the Columbine shooters — her first since the 1999 tragedy. In the preview ABC News released Friday morning, Klebold says that a day doesn't go by without her thinking about the victims.

Sue's son Dylan Klebold was one of two seniors who carried out the attack on their high school before both committing suicide. Dylan, along with Eric Harris, thoroughly planned the shooting that killed 12 students and one teacher, a plot that included more than 70 explosive devices placed throughout the school and a fire bomb to distract firefighters. Dylan's mom has had to grapple with the fact that her son took so many lives.

"I just remember sitting there and reading about them, all these kids and the teacher," Sue told Diane Sawyer in the emotional interview. "And I keep thinking — constantly thought how I would feel if it were the other way around and one of their children had shot mine. I would feel exactly the way they did. I know I would."

Sue told Sawyer that she had illusions that everything was OK because her love for her youngest son was so strong, and that it's hard to live with the fact that she didn't realize he was struggling. "I felt that I was a good mom… that he would, he could talk to me about anything," Sue said in the 20/20 interview. "Part of the shock of this was that learning that what I believed and how I lived and how I parented was an invention in my own mind. That it, it was a completely different world that he was living in."

When Sue said that not a day that goes by that she doesn't think of the people that Dylan harmed, Sawyer commented on the fact that she used the word "harmed" instead of "killed." Sue explained: "I think it's easier for me to say harmed than killed, and it's still hard for me after all this time. It is very hard to live with the fact that someone you loved and raised has brutally killed people in such a horrific way."

The sudden interview preludes the release of Sue's memoir, A Mother’s Reckoning: Living in the Aftermath of Tragedy , which hits bookstores Feb. 15. A woman paralyzed in the shooting, Anne Marie Hochhalter, wrote a heartfelt post on Facebook saying she was glad to hear that profits from the book will be donated for research and help for those with mental illness.

The full interview will air on 20/20 Friday at 10 p.m., offering more glimpses into how Sue has dealt with her grief and what her book will include.