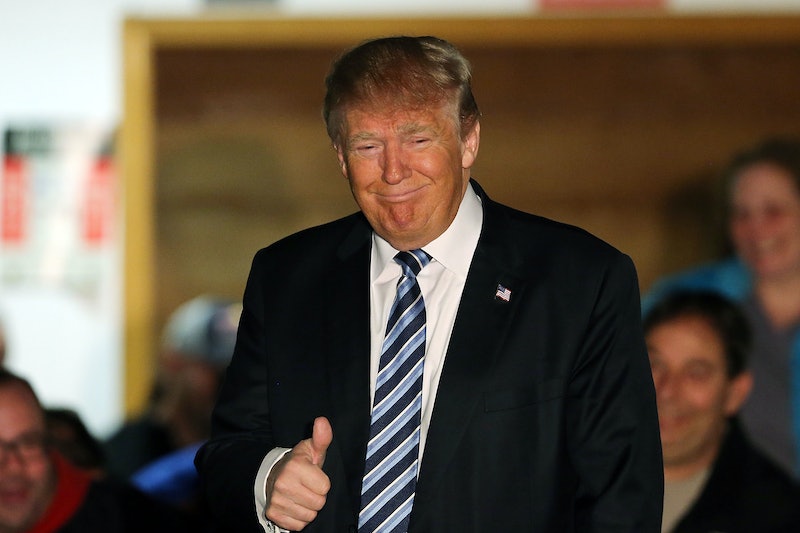 It's hard to believe that Donald Trump has remained the GOP presidential front-runner after all these months. It's even more difficult to believe that his Twitter account is real and not operated by some Internet troll. Trump uses Twitter to bash other candidates, saying things like Ted Cruz is the "worst liar, crazy, and very dishonest" and calling Jeb Bush "the weakest candidate" to his 6.14 million followers. Although Trump's real tweets are pretty entertaining, the people behind the Donald Trump parody accounts know how to "Make America Great Again" through social media humor.

Donald Trump isn't the only political celebrity with a parody account: There are numerous parody Twitter accounts for presidential candidates that poke fun at Cruz's hypothetical Google searches and Hillary Clinton's weekly rankings of Democratic candidates. Because politicians typically have to follow a script, both online and offline, their tweets usually tout their accomplishments and outline their plans for the future. However, Trump's real Twitter account and his many parody accounts are frighteningly similar.

With an aversion to political correctness at the forefront of his campaign strategy, these nine Trump parody accounts follow Trump's lead and take politics very seriously, by which I mean not at all.

The President Trump parody account has a modest, straightforward bio: "A Parody Account of the Myth, the Man, the Legend that is Donald Trump." From calling out other candidates who have suspended their presidential campaigns, to making downright racist and sexist jokes, @WriteInTrump has no reservations when it comes to tweeting exactly what's on his mind.

Unlike Donald Trump, Donald Drumpf believes he is classy, as evidenced in his self-promoting bio: "A 100% classy Donald Trump parody account. Operated under the actual family name Drumpf." It's kind of scary how similar this account is to Trump's real tweets; @RealDonalDrumpf attacks Rubio for appearing too scripted, conceitedly tweets about winning debates, and uses obscene language in roughly every other tweet.

Fake Donald Trump actually spends a lot of his time tweeting at the real Donald Trump, which makes the account even funnier because he uses pronouns like "I" and "we" in these conversations. Equal parts self-deprecation and completely out of touch with society, @TheFakeTrump knows the people want entertainment at the expense of political correctness. His Twitter bio says it all: "I'm 'MERICA'S future Douchebag Combover in Chief."

The saddest part about this parody account is that it was created in 2012, meaning that Donald Trump has been saying some insane things for many years now. @RealDonaldTrunp doesn't want you to take him too seriously, according to his bio: "The offical [sic] Twitter profile for NOT Donald Trunp. Just sit back, relax, and don't take me too seriously," which is a good thing when you see some of his tweets. Using the hashtag #TrumpCares, Donald Trunp tweets sarcastic things that show the real Donald Trump actually doesn't care about things like equal rights, but that he does care about things like snow.

The red, flat-brimmed hat that says "Make America Great Again" became an icon of Donald Trump's presidential campaign, so it's only fitting that there exists a parody account dedicated solely to said hat. Trump Hat's bio — "#AltRight edgelord. Ex-liberal. Pro-European. Anti-cuck. Anti-racist." — seems to be a confusing and aggressive combination of descriptors; apparently #AltRight means someone who identifies as a White Supremacist, so there's that. @TrumpHat mostly tweets funny memes and images that attack the other candidates, especially Marco Rubio and Jeb Bush, who the real Trump openly attacks whenever he gets a chance.

Even more iconic than the Trump Hat is Donald Trump's hair. @TrumpsHair is a hilarious parody account that chronicles the hypothetical daily musings and everyday thoughts of The Donald's hair. The account mostly replies to other people's tweets that mention things about Trump's hair, which are pretty funny because "the hair" adopts the self-centered personality of the real Trump. Arguably the best part is the account is its Twitter bio — "I'm on top of the man who is on top of the world. Follow me, people." — and its location: "On Top of Donald Trump's Head."

It's kind of sad how similar Fake Donald J. Trump and Donald Trump are on Twitter. Calling people losers, criticizing other candidates for being low energy, and championing his idea to build a wall to prevent immigrants from entering the United States are all hot topics on this parody account and Trump's real account. @FakeTrump2016 might crack jokes in his tweets, but he wants you to know he's serious about making America great. In his bio, Fake Donald J. Trump says: "Parody of the campaign/personage of the 45th President of the United States Donald J. Trump. But the pursuit to #MakeAmericaGreatAgain is no parody. #Trump2016" Pretty much says it all.

The Trump 4 Prezident account is probably the most disturbing parody account yet, thanks to the creepy, distorted images it posts of Donald Trump. At first, it seems like a genuine account in support of Trump as the next president, but once you see the entire timeline filled with odd photos and even stranger captions you'll know it's not real. The account is so photo-heavy, that there's a separate Trump4Prezident Instagram, if you're into that sort of thing.

Although Jeb Bush was offered the NFL commissioner position before running for president, apparently Football Trump thinks he'd be better for the job. This parody account focuses solely on football and what it would be like if Trump were the NFL commissioner. @TrumpForCommish is all football, all the time, but it perfectly incorporates jokes about Trump firing different players as if they were on The Apprentice and punishing players by forcing them to wear Trump wigs for a week. Instead of making America great again, Football Trump wants to "make football great again" as the next NFL commissioner.