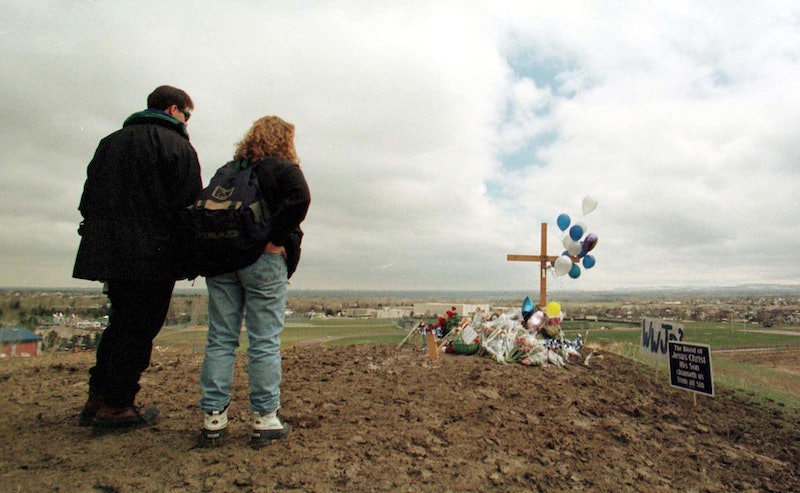 For the past 17 years, Susan Klebold has grappled with making sense of why her son Dylan Klebold would be involved in one of the worst mass shootings in U.S. history — the Columbine High School massacre. Although Susan has made a few media appearances in the years since the Columbine attacks, she had not made a television appearance until Friday, Feb. 12 with ABC's Diane Sawyer. Now, after reflecting on what could have caused her son to carry out, Susan Klebold raises mental health awareness among parents through her ABC interview and her forthcoming book, A Mother's Reckoning: Living In The Aftermath Of Tragedy.

On April 20, 1999, two high school students carried out a deadly massacre at Columbine High School in Littleton, Colorado. Dylan Klebold, 17, and Eric Harris, 18, left for school with homemade propane bombs and four guns to murder innocent classmates and teachers. Although the bombs did not go off as planned, Klebold and Harris opened fire in the school around 11:20 a.m., killing twelve students and one teacher, and injuring 24 others. The two boys killed themselves after the attacks.

According to the National Alliance on Mental Illness (NAMI), 50 percent of lifetime cases of mental illness begin by age 14 and 20 percent of youth ages 13 to 18 live with some sort of mental illness. There are different symptoms associated with mental illness, and many can be difficult for others to recognize. In her interview with ABC, Klebold said she missed any warning signs in her son Dylan. "I had all those illusions that everything was OK because, and more than anything else, because my love for him was so strong," she said.

After living with the guilt of what her son did, as well as her own guilt in missing Dylan's signs of mental illness, Klebold wants to help raise awareness among parents whose children might be dealing with mental health issues. Here's what Klebold wants parents to know about mental illness:

High school can be a confusing time for both teenagers and their parents. Many teenagers experience mood swings during this time, and often that results in what society deems "normal" teenage behavior: a moody, angsty teen who is closed off from talking about his or her feelings with parents. However, Klebold encourages parents to reject the idea that "normal" teenage behavior exists, as she has learned through her late son Dylan that it could be signs of larger mental health problems. On the website for her book, Klebold talks about this phenomenon of digging past what seems normal to find the real problems:

I wish I had known then what I know now: that it was possible for everything to seem fine with him when it was not, and that behaviors I mistook as normal for a moody teenager were actually subtle signs of psychological deterioration

Although mental health is something that manifests in the psyche, it can often lead to physical, bodily harm in different forms. Among people 10 to 24 years old, suicide is the second leading cause of the death, and 90 percent of those who die by suicide have an underlying mental illness, according to NAMI. In her 2009 essay for O magazine, Klebold wrote about how she realized mental health could pose a serious physical threat, namely suicide and homicide. She also touches on how parents raise their children to avoid various dangers, yet for many, teaching children to avoid the dangers of mental illness goes largely ignored:

In raising Dylan, I taught him how to protect himself from a host of dangers: lightning, snake bites, head injuries, skin cancer, smoking, drinking, sexually transmitted diseases, drug addiction, reckless driving, even carbon monoxide poisoning. It never occurred to me that the gravest danger — to him and, as it turned out, to so many others — might come from within. Most of us do not see suicidal thinking as the health threat that it is. We are not trained to identify it in others, to help others appropriately, or to respond in a healthy way if we have these feelings ourselves.

Writing Can Be Better Than Talking

As some kids grow older, they begin talking less with their parents, as Dylan did with his parents. Instead, teenagers sometimes turn to writing in a journal or a diary to document their feelings. Finding and reading Dylan's journal entries was helpful in understanding the severity of Dylan's depression, Klebold explains in her O magazine essay. By disclosing the intimate details of Dylan's writing and how it helped diagnose him as depressed and suicidal, Klebold advocates to parents to take these writings seriously, as teenagers might feel more comfortable writing things down rather than talking with others:

From the writings Dylan left behind, criminal psychologists have concluded that he was depressed and suicidal. When I first saw copied pages of these writings, they broke my heart. I'd had no inkling of the battle Dylan was waging in his mind. As early as two years before the shootings, he wrote about ending his life. In one poem, he wrote, 'Revenge is sorrow / death is a reprieve / life is a punishment / others' achievements are tormentations / people are alike / I am different.' He wrote about his longing for love and his near obsession with a girl who apparently did not know he existed.

Klebold's book, A Mother's Reckoning: Living in the Aftermath of Tragedy is available Feb. 15, 2016 and all proceeds will go to mental health foundations to increase awareness.