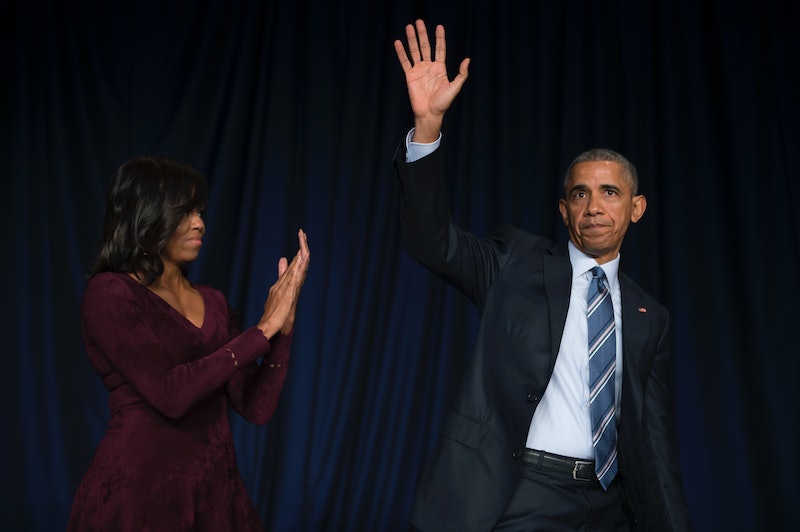 President Obama made his first appearance on The Ellen DeGeneres Show just before Valentine's Day weekend on Friday. The commander in chief was met with a special surprise when First Lady Michelle Obama called in to recite a short and sweet Valentine's Day poem for her husband. DeGeneres helped the president take the moment to an even more romantic level, leading him off to an intimate enclave that included a backdrop of red velvet curtains, roses, and doric columns. Not one to be outdone, Obama had already prepared some remarks of his own for the first lady. The segment had FLOTUS and POTUS trading Valentine's Day poems in the most adorable way possible.

Michelle kicked things off with a special video message, joking that she'd come up with her poem for the president while doing 100 push-ups to get the creative juices flowing. Michelle said:

I just wanted to wish you a happy Valentine's Day. It's our last one that we'll spend in the White House and in honor of that, I wrote you a little Valentine's Day poem that I wanted to share. Roses are red, violets are blue, you are the president, and I am your boo... Barack, I know there's a See's Candy out there so bring me something chocolatey back. You know what to do.

The poem was met with applause as Michelle went on to wish her husband, the talk show host and her wife, as well as everyone watching a happy Valentine's Day.

Obama's love poem to Michelle felt more like a testimonial leading up to a sensual R&B song, complete with Barry White backing track playing from a boombox. The ode was filled with the president's standard fare dad jokes as well as sweet asides at Michelle's healthy eating and fitness initiative for kids, Let's Move. Not everyone can claim servings of zucchini bread and veggies as aphrodisiacs but apparently POTUS and FLOTUS can. Perhaps the sweetest lines from the president came at the end of his poem. After somewhat flubbing the title of DeGeneres' HGTV series and laughing off the gaffe, Obama composed himself. The president then said:

I love you so much. I Obamacare about you more than you even know. That's right. Obama cares. But, Michelle, I've made a lot of great decisions as president. The best decision I ever made was choosing you.

To FLOTUS, DeGeneres is the only person she'd share her husband with on such a special day and not just because his studio appearance puts him one step closer to a box of See's Candies. Michelle is a repeat guest on The Ellen DeGeneres Show, and the two have even collaborated for Let's Move. DeGeneres played a perfect cupid to help kick off a truly romantic final Valentine's Day in the White House for the first husband and wife.