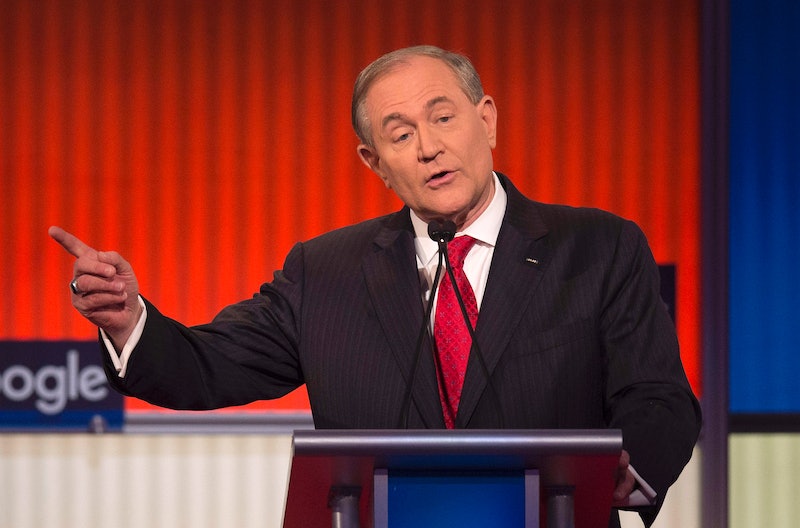 On Friday, unlikely White House contender Jim Gilmore officially quit the presidential race. Gilmore's presidential campaign was mostly notable for how long it lasted considering how little momentum the former governor of Virginia maintained. To say Gilmore had long been mostly forgotten among the already-bursting collection of Republican candidates would be an understatement. Gilmore has failed to make the main stage of any of the previous Republican debates, meaning his campaign had largely faded into the ether. In the New Hampshire primary, Gilmore performed worse than GOP candidates Carly Fiorina and Chris Christie, who still dropped out of the race before he pulled the plug.

In fact, they weren't the only ones who polled better than Gilmore in the Granite state. Performance artist Vermin Supreme, who campaigned for Tuesday's primary while wearing a boot as a hat and "a half dozen wild neckties and a leopard print cape," as Mashable's Meghan Specia noted, earned more votes in New Hampshire than Gilmore managed to snag. To be fair, Supreme was registered as a Democrat, but his 260 votes were nearly double the 133 that Gilmore garnered.

"My campaign was intended to offer the gubernatorial experience, with the track record of a true conservative, experienced in national security, to unite the party," Gilmore said in a statement, announcing he was suspending his presidential bid. Gilmore vowed to continue to "express my concerns about the dangers of electing someone who has pledged to continue Obama's disastrous policies" and "will continue to do everything I can to ensure that our next President is a free enterprise Republican who will restore our nation to greatness and keep our citizens safe."

To add insult to injury, hours before Gilmore terminated his presidential campaign, CBS announced the Saturday Republican South Carolina debate lineup — and it included all of the remaining GOP candidates, except for Gilmore. His 2016 presidential campaign was not Gilmore's first run for the White House. He had set his sights on the 2008 Republican presidential nomination, but that campaign lasted only a few months. In 2008, Gilmore was beaten by Democrat Mark Warner in the race to fill a U.S. Senate seat for Virginia by nearly two-to-one margins.

For the 2016 election, Gilmore entered the race in July 2015 as the 17th Republican candidate. The remaining Republican presidential candidates are: Jeb Bush, Ben Carson, Ted Cruz, John Kasich, Marco Rubio, and — lest we ever forget — Donald Trump.