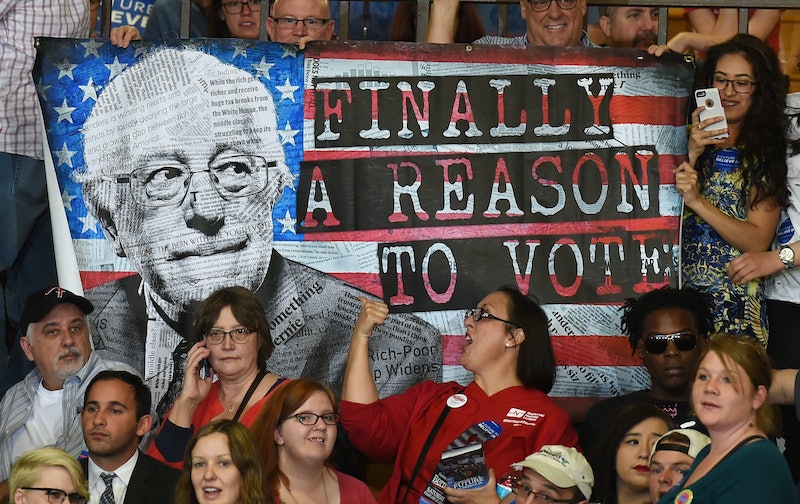 The 2016 election season is in full swing. Candidates are packing their schedules with rallies and campaign stops in between heated debates, primaries, and caucuses. The next caucus for both Democrats and Republicans just so happens to take place in the west. It's the third such time that candidates are taking to an early caucus in Nevada. The Silver State changed to an early designation in 2006 — just in time for the 2008 election. Its "first in the west" status makes the event an incredibly important one, as does the way that delegates are distributed. Are delegates in the Nevada Caucus divided proportionally? While there is a possibility that all delegates may go to one candidate, there is no guarantee based off the process for either party.

For Democrats, who are set to hold their caucus in Nevada on Saturday, the event holds substantial meaning given just how close in popularity both candidates are. According to a recent CNN/ORC Poll, Sanders and Clinton are reportedly neck in neck. Clinton has 48 percent while Sanders has 47 percent. 35 Democratic delegates are up for grabs and will be distributed in a way that corresponds with based off viability and voting.

All eight Democratic superdelegates in the state may remain unpledged until the Democratic National Convention in July, though three have pledged to frontrunner Hillary Clinton while one has pledged to Bernie Sanders. The process is open to all registered Democrats in the state of Nevada and begins bright and early at 11 a.m. PST.

Republicans have firmly placed their focus on the upcoming South Carolina primary, set to take place the same day as the Democrats' Nevada caucus. The GOP's Nevada caucus is imminent, however, and is set to be held just three days later on Tuesday, Feb. 23. Superdelegates are not a factor for Republicans in Nevada, as there are none available for candidates in the state. Instead, what counts is which candidate receives the highest voting percentage.

The distribution of Nevada's 30 Republican delegates is entirely based off of those attending the caucus. The most popular candidate will get the most delegates. The aforementioned CNN/ORC poll indicates that that candidate will most likely be GOP frontrunner Donald Trump, who currently holds a substantial lead with 45 percent of presumed Republican caucusgoers supporting the candidate.

What's unique about the Republican Nevada caucus is its evening designation. The event is set to take place starting at 5 p.m. PST and will reportedly end by 9 p.m. PST. Though only registered Republicans may attend and participate, the GOP will allow absentee voting for active military personnel in the country and serving abroad as well as their dependents. Disabled veterans are also eligible to vote absentee during the Republican Nevada caucus.

A clearer picture of who will nab the most delegates will undoubtedly emerge following the South Carolina primary. For now, Nevada voters are eagerly preparing to have their voices heard in what's proven to be one of the most exciting elections in recent memory.