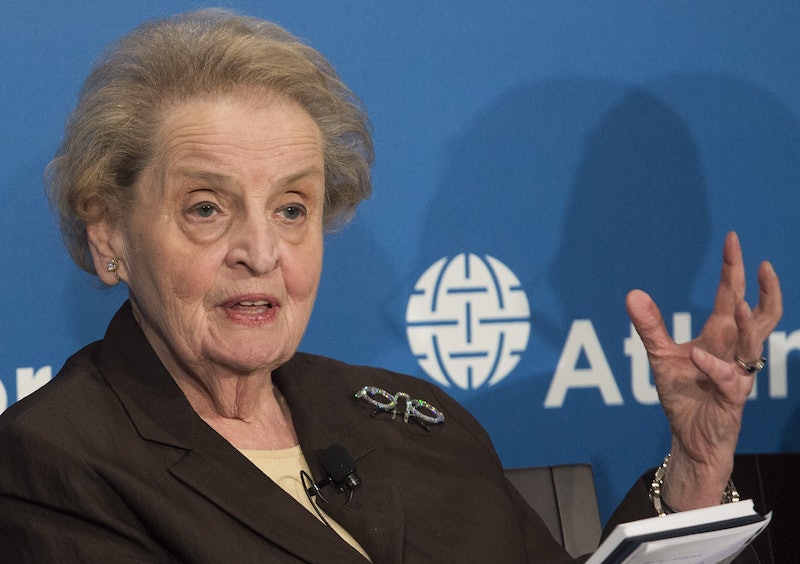 Former Secretary of State Madeleine Albright got in hot water recently for implying that women who don’t vote for Hillary Clinton aren't feminists. On Friday, she attempted damage control, explaining in a New York Times op-ed her “undiplomatic moment.” There’s one line of Madeleine Albright’s op-ed in particular that addressed the controversy directly, and it touches upon the larger, more complicated issue of what role gender politics should play for prospective Hillary Clinton voters.

About a week earlier, Albright said that “there’s a special place in hell for women who don’t help each other.” Within the Democratic Party, that line wouldn’t have been terribly controversial — except for the fact that she said it at a Hillary Clinton campaign rally. The purpose of a campaign rally, of course, is to convince people to vote for the candidate in question, and so Albright was essentially implying that women who vote for Bernie Sanders will burn forever in the fiery flames of anti-feminist hell.

Unsurprisingly, that upset a lot of people, and Albright attempted to explain herself in an op-ed Friday.

“I absolutely believe what I said, that women should help one another, but this was the wrong context and the wrong time to use that line,” Albright wrote, and she’s right. Her words themselves weren’t all that inflammatory, and had she uttered them at, say a United Nations summit on worldwide gender equality, they probably would have passed without much notice. The problem was purely where she spoke them, and to what end.

All of this circles back to bigger, thornier questions looming over the Democratic primary. Is voting for Hillary Clinton the best way for women to “help each other out,” as Albright implied? What factors are fair game to consider in making a judgement like that, and how should feminist voters weigh them? Should the symbolic importance of electing a woman president be taken into account? How about the barrage of sexist attacks she’s faced for the last two decades? Or are Clinton’s policies the only fair way to judge?

Many reasonable people will disagree on these questions, of course. I suspect most would agree, though, that the mere fact that Clinton is a women is not, by itself, a sufficient reason to vote for her. After all, there aren’t many feminists arguing that women should support Michele Bachmann and Sarah Palin, both of whom want to outlaw all abortions even in cases of rape and incest, simply because they’re women. Policies matter, too.

“I did not mean to argue that women should support a particular candidate based solely on gender,” Albright wrote in her mea culpa. “But I understand that I came across as condemning those who disagree with my political preferences.”

It’s clear that Albright understands why her words were so controversial. Personally, I find her account a bit tough to reconcile with the words she used. Her exact phrasing was this:

You have to help Hillary Clinton and Hillary Clinton will always be there for you. And just remember there’s a special place in hell for women who don’t help each other.

I don’t know how else to interpret that other than as an assertion that women must vote for Hillary Clinton in order to "help each other out," but that’s just me. However, the question of what argument Madeleine Albright was intending to make a week ago at a rally isn’t the main issue here. There are much larger questions about how feminist women should approach Clinton’s candidacy, and those questions won't be answered tidily in a New York Times op-ed.