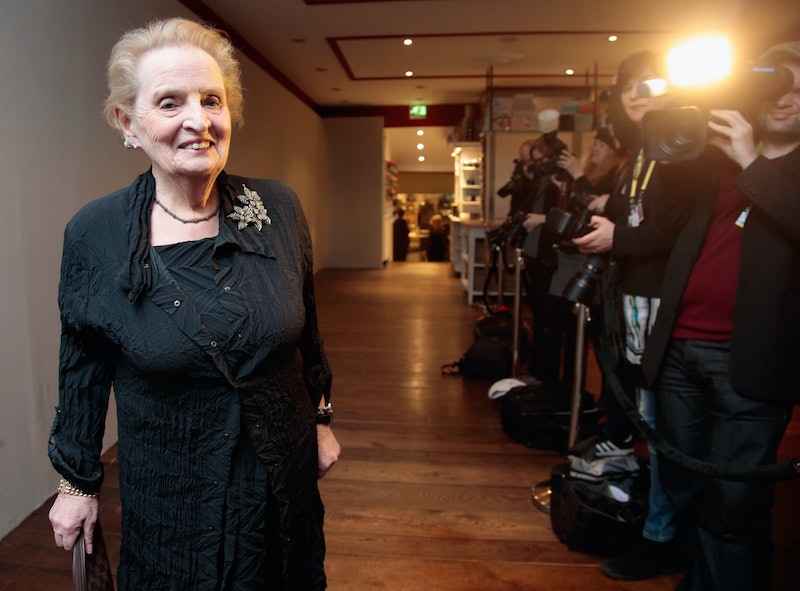 Former Secretary of State Madeleine Albright put a positive spin on her recent controversial gaffe at a Hillary Clinton campaign that triggered backlash among both progressive and conservative American women. At last Saturday's event, Albright, a self-identified feminist, repeated her famous line: "There's a special place in hell for women who don't help each other." The first female secretary of state said the quote as if it were a warning to women who don't have plans to vote for Clinton, possibly insinuating that women should vote for Clinton because of her gender. Now, Albright is backing away from her controversial statement, tweeting that instead of worrying about spending eternity in hell, women should look toward the sky.

To accompany her New York Times editorial published on Friday, Albright tweeted on Saturday: "There's also a place in heaven for women who help one another." The inverting of her quote reframes her ultimate message — instead of knocking women down and causing feminist infighting, women should stay focused on supporting each other and the positive outcomes that will arise from this support in the long run.

Bottom line: Don't get mad at the #FeelTheBern ladies. Don't start a debate over feminist cred. Let's focus on the positive as we continue to discuss whether or not women "should" feel obligated to support a candidate who shares their gender.

Albright's tweet still implies, of course, that women should think about supporting Clinton, who's currently ensnared in a tight race for the Democratic presidential nomination. But she has made it less aggressive and demeaning than her previous statement, which seemed like a direct attack on Sanders' women supporters.

Of that statement, which Albright first famously said in the 1980s, the former secretary of state wrote in her New York Times Op-Ed: "one might assume I know better than to tell a large number of women to go to hell."

While Albright is backing off on her attack, she continues to uphold her support for Clinton, writing in her editorial:

In a society where women often feel pressured to tear one another down, our saving grace lies in our willingness to lift one another up. And while young women may not want to hear anything more from this aging feminist, I feel it is important to speak to women coming of age at a time when a viable female presidential candidate, once inconceivable, is a reality.