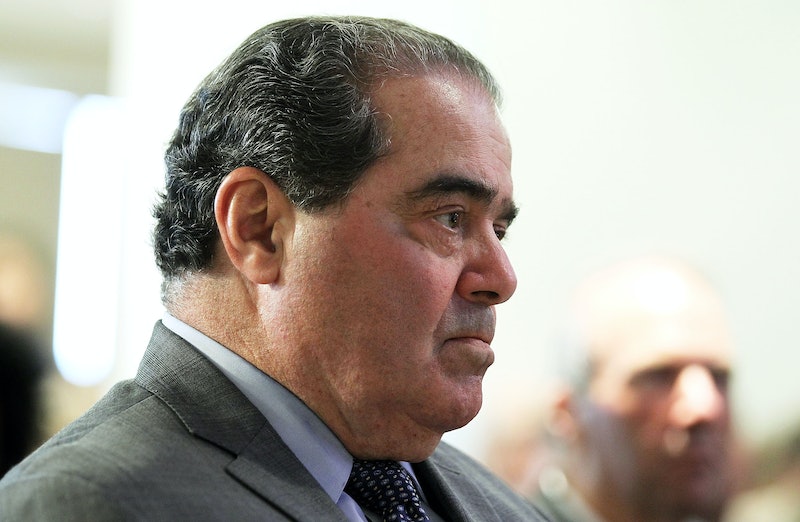 U.S. Supreme Court Justice Antonin Scalia was found dead on Saturday, and the heated political climate has people already asking when Justice Scalia will be replaced. Scalia reportedly died of natural causes at age 79, and his body was found after he did not show up for breakfast at the Cibolo Creek Ranch where he was staying in West Texas. Update: According to the New York Times, Obama has indicated that he plans to choose Scalia's replacement promptly.

Scalia was appointed to the Supreme Court by Ronald Reagan in 1986, and President Obama will be tasked with appointing his replacement, per the U.S. Constitution — a document that Scalia viewed through the lens of originalism, which states that the Constitution's meaning does not change or evolve over time. Obama can be expected to appoint a replacement whose views will more align with his own. Once Obama chooses his nominee, the US Senate will hold confirmation hearings and then put the nominee to a vote. A majority of 51 wins, which may be difficult for Obama in a Senate that currently has 54 Republicans, 44 Democrats, and two Independents. There is definitely a concern that the Republican-controlled Senate will do their best to put off the confirmation of any less-than-conservative nominee in the hopes that a Republican president will be elected in the fall and the task of nomination will then go to him.

The timeline for all this action to take place isn't set in stone, and having a Democratic president try to replace a conservative justice in a Republican-led Senate will surely prove difficult. The last person to join the Supreme Court was Justice Elena Kagan, who was nominated by Obama on May 20, 2010 in anticipation of Justice John Paul Stevens' impending retirement on June 29 of that year. She was confirmed by a 63-37 vote of the Senate on Aug. 5, 2010. The last Justice to die on the bench was William Rehnquist on Sept. 2, 2005. George W. Bush nominated John Roberts as his replacement on Sept. 5, and he was quickly appointed on Sept. 29 of the same year.

As for who Obama will nominate to replace Scalia, many are speculating over Sri Srinivasan, who recently joined the U.S. Court of Appeals in D.C. For their part, Republican presidential candidates Marco Rubio and Ted Cruz are suggesting that the task of replacing Scalia should go to the next president.