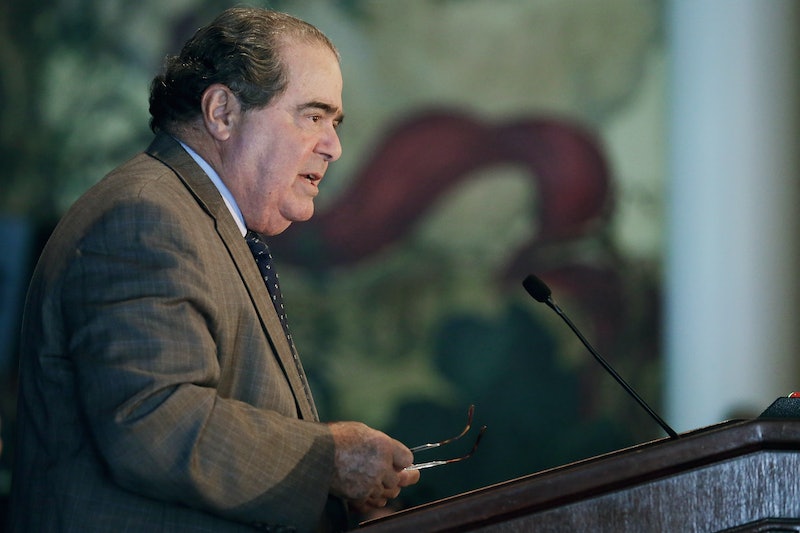 Saturday, reports surfaced that U.S. Supreme Court Justice Antonin Scalia had passed away in Texas. According to The Guardian, the 79-year-old Justice Scalia died of natural causes during his stay at a West Texas luxury resort. Appointed by Ronald Reagan in 1986, Scalia served his country for many years, and has been interviewed countless times — and though he was speaking at SCOTUS through early 2016, Justice Scalia's final video appearance was actually a good while ago at Stone Ridge High School in Bethesda, Maryland in June 2015.

Justice Scalia was making headlines right up until his death thanks to his controversial comments on Affirmative Action, the Justice's final video appearance is one even his detractors can praise. He took to the podium at Stone Ridge to rip apart traditional commencement speech platitudes in order to offer the graduating class of 2015 real advice. Scalia, who was the longest serving Justice on the Supreme Court, refused to fall back on classic commencement speech tropes like telling the class how they would face "unprecedented challenges," and instead reminded them that every time period comes with its own set of difficulties.

Rather than advise students to stick to their principles, he told the class, "If I had to choose, I would always take the less dynamic, indeed even the lazy person who knows what's right rather than the zealot in the cause of error. He may move slower, but he's headed in the right direction." This is a far cry from the often polarizing figure Scalia was on the stand, but a reminder that there was more to the man than the controversial opinions he held.

You can see his appearance below.