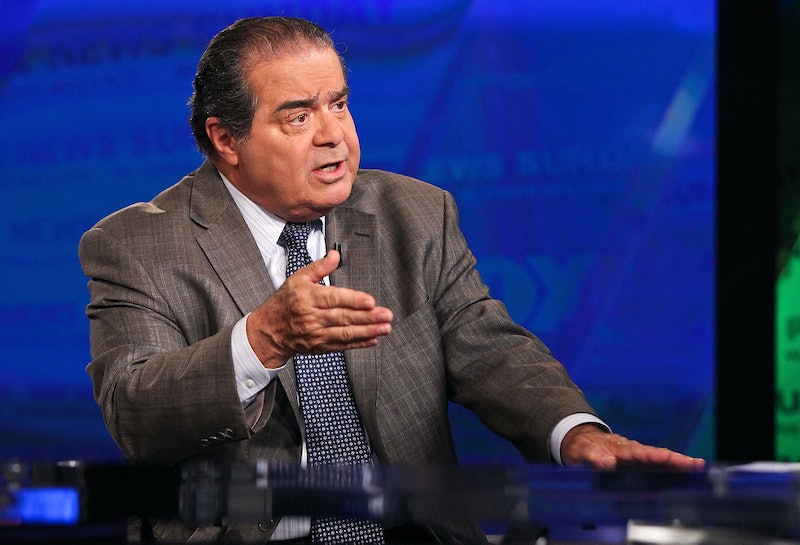 Supreme Court Justice Antonin Scalia died on Saturday, which sent the media into a frenzy of speculation over when Obama would nominate a successor, who that potential successor would be, and if the president's nominee would be able to make it through the confirmation process. Looking at Scalia's most famous opinons, it's clear that his politics are very different from those of our current president, and it's likely that Obama's nominee will be considerably more liberal than the notoriously conservative justice. But, such a move could be blocked by a Republican-led Senate that's biding its time in the hopes of a conservative 45th president.

The below cases are ones in which Scalia's opinions starkly expressed where he stood politically — his dissenting opinions are particularly telling with regards to those issues that are at the forefront of the current political conversation. Liberal Justice Ruth Bader Ginsburg said of her benchmate, "I disagreed with most of what he said, but I loved the way he said it."

This 2003 case struck down Texas' anti-sodomy laws, and Scalia's dissent expressed distress over what this could mean for other "laws based on moral choices," grouping together same-sex marriage with bestiality and adult incest.

He also accused the court of having "signed on to the so-called homosexual agenda, by which I mean the agenda promoted by some homosexual activists directed at eliminating the moral opprobrium that has traditionally attached to homosexual conduct."

Prisoners at Guantanamo Bay have a constitutional right to challenge their detention in federal court, according to this case. Scalia felt differently, writing that this ruling would "almost certainly cause more Americans to be killed" and "the nation will live to regret what the court has done today."

When the majority opinion struck down much of Arizona's anti-illegal immigration law, Scalia wrote in the dissent that President Obama's immigration policy "boggles the mind."

This case upheld Obamacare, and Scalia's dissent here was especially notable for its colorful language. "The Court's next bit of interpretive jiggery-pokery involves other parts of the Act that purportedly presuppose the availability of tax credits on both federal and state Exchanges," he wrote.

In his dissent over this seminal case on same-sex marriage, Scalia seemed less upset by the issue at hand and more about the power the Supreme Court exerted over the country's citizens.

He wrote, “It is not of special importance to me what the law says about marriage. It is of overwhelming importance, however, who it is that rules me. Today’s decree says that my Ruler, and the Ruler of 320 million Americans coast-to-coast, is a majority of the nine lawyers on the Supreme Court."

And the way those nine lawyers will rule going forward is largely dependent on who will fill Scalia's shoes.