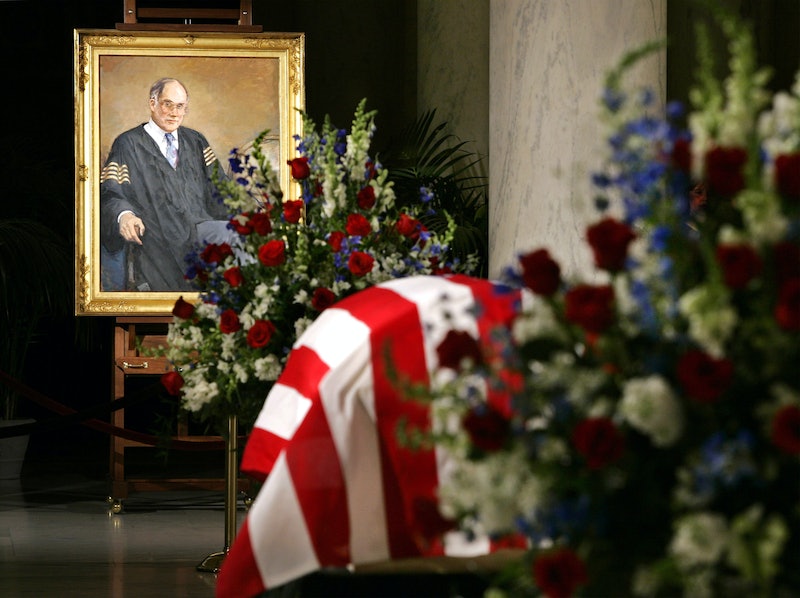 Many Supreme Court justices retire from their position at a leisurely pace, spending years on the Court and then stepping down once they feel their work has been done. So the news that Supreme Court Justice Antonin Scalia had died of natural causes at the age of 79 was shocking for the majority of the country. There hadn't been any indication that he was ill, so it was a mixture of disbelief and confusion when the governor of Texas confirmed Scalia's death. It was a much different feeling from when the death of the last Supreme Court justice who died while serving, William Rehnquist, was announced.

Rehnquist, who served on the Supreme Court for more than 30 years, died in 2005 at the age of 80 after a public yearlong battle with cancer. Although rumors swirled at the time about whether or not he would retire, The New York Times reported that he issued a statement weeks before his death saying he would continue to serve as chief justice for "as long as my health permits." Just a year prior, in 2004, the Court announced that Rehnquist had an aggressive form of thyroid cancer — so aggressive he had to get a tracheotomy. So while his death was, in general, shocking at the time, it wasn't completely unexpected.

Like Scalia, Rehnquist was a noted conservative, and he changed the course of a then-liberal Court of the 1960s. Nominated by President Nixon and promoted to chief justice by President Reagan, Rehnquist oversaw the impeachment trial of President Bill Clinton and made significant decisions regarding the Constitution's Commerce Clause. In United States v. Lopez and Morrison v. United States, Rehnquist's decision that Congress overstepped its boundaries regarding a gun law and a gender violence law had huge implications on the course of the United States' future.

Justices dying while serving on the Supreme Court is thankfully rare — the last justice to die while actively serving before Rehnquist was Robert H. Jackson, in 1954.