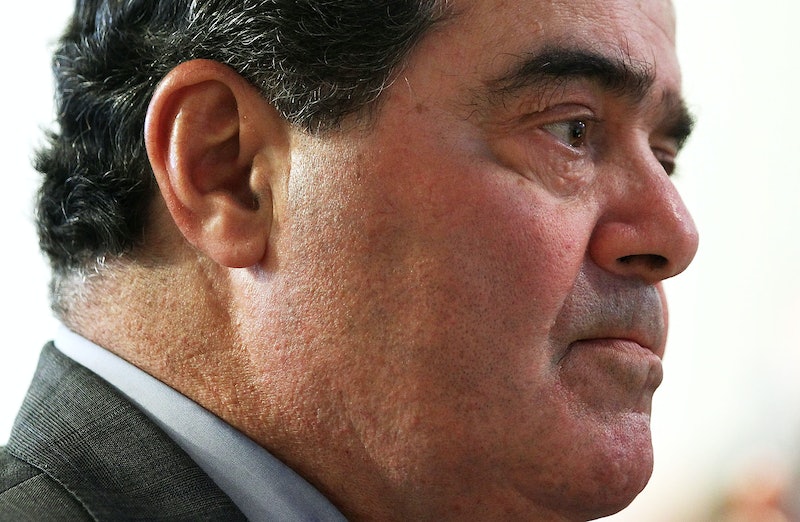 On Saturday morning, Supreme Court justice Antonin Scalia was found dead at 79. During his time on the court, the fiercely conservative Scalia carved out a name for himself as a conservative intellectual force famous for his hybrid mix of originalist and textualist approaches to Constitutional and statutory law, respectively. The outspoken justice was also famous for his controversial, if slightly confusing, highly quotable statements.

The one quote that defines Antonin Scalia's SCOTUS career would have to be this widely repeated but little understood gem from 1987, less than one year after he was appointed to the bench by then-President Ronald Reagan. As part of the April 20, 1987 majority ruling in mergers and acquisitions case CTS Corp. v. Dynamics Corp. of America, Scalia filed a concurrent judgement (agreeing with the majority opinion written by Justice Lewis Powell, Jr. but adding in his own spin) where he said:

A law can be both economic folly and constitutional.

While, in this case, Scalia is speaking in support of the existing Indiana law governing corporate mergers, this quote has become a staple go-to quote for pro-business activists looking for support from the conservative intellectual heavyweight for their positions. However sure Scalia was in his own thoughts, it is clear that his thinking will continue to be a source of controversy for some time to come.

While limited-government enthusiasts like supporters of Ted Cruz or Rand Paul may use this line of thought to advance their own views in favor of a small government that does not trample on the constitutional rights of individual citizens or corporations, in reality, Scalia's concurrent judgement shows more affinity with the mindset of traditional conservatives like Jeb Bush or John Kasich.

Scalia goes through great pains to uphold the existing law as it is and not have it declared unconstitutional, which could have the effect of establishing a precedent for additional, related laws to be deemed unconstitutional. He even raises the question whether or not the court should even be discussing this in the first place, writing in his judgement: "such an inquiry is ill-suited to the judicial function, and should be undertaken rarely, if at all. This case is a good illustration of the point."

Writing this particular ruling less than one year after his appointment to the bench, it helped set the tone of the deeply conservative Scalia's tenure as part of the highest court in the land. Whomever President Obama decides to appoint to fill his seat, it is almost certain that they will represent a completely different perspective from that of the one-of-a-kind legal heavyweight.